The Testimony of the Rocks or, Geology in Its Bearings on the Two Theologies, Natural and Revealed 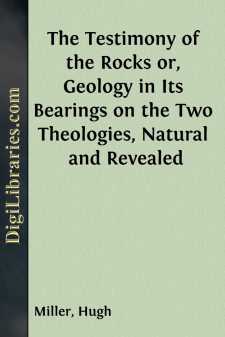 This volume is chiefly taken up in answering, to the best of its author's knowledge and ability, the various questions which the old theology of Scotland has been asking for the last few years of the newest of the sciences. Will you pardon me the liberty I take in dedicating it to you? In compliance with the peculiar demand of the time, that what a man knows of science or of art he should freely communicate to his neighbors, we took the field nearly together as popular lecturers, and have at least so far resembled each other in our measure of success, that the same class of censors have been severe upon both. For while you have been condemned as a physiologist for asserting that the human framework, when fairly wrought during the week, is greatly the better for the rest of the Sabbath, I have been described by the same pen as one of the wretched class of persons who teach that geology, rightly understood, does not conflict with revelation. Besides, I owe it to your kindness that, when set aside by the indisposition which renders it doubtful whether I shall ever again address a popular audience, you enabled me creditably to fulfil one of my engagements by reading for me in public two of the following discourses, and by doing them an amount of justice on that occasion which could never have been done them by their author. Further, your kind attentions and advice during the crisis of my illness were certainly every way suited to remind me of those so gratefully acknowledged by the wit of the last century, when he bethought him of

"kind Arbuthnot's aid,Who knew his art, but not his trade."

And so, though the old style of dedication has been long out of fashion, I avail myself of the opportunity it affords me of expressing my entire concurrence in your physiological views, my heartfelt gratitude for your good services and friendship, and my sincere respect for the disinterested part you have taken in the important work of elevating and informing your humbler countryfolk,—while at the same time maintaining professionally, with Simpson and with Goodsir, the reputation of that school of anatomy and medicine for which the Scottish capital has been long so famous.

Of the twelve following Lectures, four (the First, Second, Fifth, and Sixth) were delivered before the members of the Edinburgh Philosophical Institution (1852 and 1855). One (the Third) was read at Exeter Hall before the Young Men's Christian Association (1854), and the substance of two of the others (the Eleventh and Twelfth) at Glasgow, before the Geological Section of the British Association (1855). Of the five others,—written mainly to complete and impart a character of unity to the volume of which they form a part,—only three (the Fourth, Seventh, and Eighth) were addressed viva voce to popular audiences. The Third Lecture was published both in this country and America, and translated into some of the Continental languages....