The Ten Pleasures of Marriage and the Second Part, The Confession of the New Married Couple 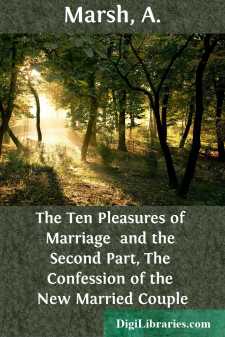 he Restoration brought back to England something more than a king and the theatre. It renewed in English life the robust vitality of humour which had been repressed under the Commonwealth—though, in spite of repression, there were, even among the Puritan divines, men like the author of Joanereidos, whose self-expression ran the whole gamut from freedom to licentiousness.

It is a curious thing, that fundamental English humour. It can be vividly concentrated into a single word, as when, for instance, the chronicler of The Ten Pleasures of Marriage revives the opprobrious term for a tailor—"pricklouse": the whole history of the English woollen industry and of the stuffy Tudor and Stuart domestic architecture is in the nickname. Or a single phrase can light up an idea, as when, a few days before marriage, "the Bridegroom is running up and down like a dog." But, on the other hand, the spirit manifests itself sometimes in exuberance, as when Urquhart and Motteux metagrobolized Rabelais into something almost more tumescent and overwhelming than the original. In that vein of humour the present work frequently runs. The author is as ready to pile up his epithets as Urquhart himself. Let the Nurse go, he says, "for then you'll have an Eater, a Stroy-good, a Stufgut, a Spoil-all, and Prittle-pratler, less than you had before."

It is, in fact, as an example of English humour—exaggerated, no doubt, by the reaction from Puritanism—that The Ten Pleasures of Marriage should be viewed, in the main. It is true, however, that it is of uncertain parentage and must own to foreign kin. A well-known but (by a strange coincidence) almost equally rare book is Antoine de la Salle's Quinze Joies de Mariage. It seems possible that this was translated into English. At any rate, in the year in which The Ten Pleasures was published—1682-1683—the following work was registered at Stationers' Hall: The Woman's Advocate, or fifteen real comforts of matrimony, being in requital of the late fifteen sham comforts. Moreover, The Ten Pleasures was in all probability printed abroad—Hazlitt thinks at The Hague or Amsterdam. The very first page in the original edition contains one of several hints of Batavian production—"younger" is printed "jounger." The curious allusion to the great French poet, Clément Marot, may also suggest a temporary foreign sojourn for the author for though Marot was doubtless known to English readers in the seventeenth century, the exact reference of the allusion is not at all obvious. It very possibly reflects on the fact that in 1526 the Sorbonne condemned both Marot and his poem Colloque de l'abbé et de la femme sçavante; and Marot certainly wrote about women and marriage. He is not, however, a "stock" figure in English literary allusion, either learned or popular, and the fact suggests at least familiarity with the literature of other countries.

But there can be no doubt of the English character of the text both in general and in detail. It is redolent of English middle-class life as it was in the days before our grandfathers decided that the human body was an obscene thing and its functions deplorable. It has the middle-class love of good food—Colchester oysters (famous then as now), asparagus, peaches, apricots, candied ginger, China oranges, comfits, pancakes—enough to make the mouth water. It has the solid English furniture, with all its ritual of solemnity; "vallians" (valences), "daslles" (tassels), big bedsteads, Chiny-ware, plush chairs, linen cupboards. It has all the fuss of preparation for childbirth—the accumulations of wrappings, the obstetric furniture, the nods and winks of the midwife and the gossips, authentic ancestors of Mrs Sarah Gamp and Mrs Elizabeth Prig—why, the haste to fetch the midwife at the crisis might almost be the foundation upon which Dickens built the visit of Seth Pecksniff, Esq., to Kingsgate Street, High Holborn.

It has likewise many touches which show knowledge of the average fairly prosperous English life—the merchant's, the shopkeeper's, the sea-captain's....