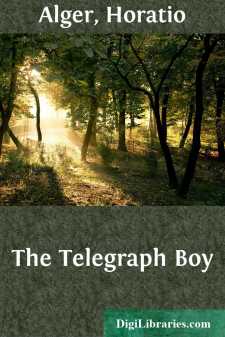 "Twenty-five cents to begin the world with!" reflected Frank Kavanagh, drawing from his vest-pocket two ten-cent pieces of currency and a nickel. "That isn't much, but it will have to do."

The speaker, a boy of fifteen, was sitting on a bench in City-Hall Park. He was apparently about fifteen years old, with a face not handsome, but frank and good-humored, and an expression indicating an energetic and hopeful temperament. A small bundle, rolled up in a handkerchief, contained his surplus wardrobe. He had that day arrived in New York by a boat from Hartford, and meant to stay in the city if he could make a living.

Next to him sat a man of thirty-five, shabbily dressed, who clearly was not a member of any temperance society, if an inflamed countenance and red nose may be trusted. Frank Kavanagh's display of money attracted his attention, for, small as was the boy's capital, it was greater than his own.

"Been long in the city, Johnny?" he inquired.

"I only arrived to-day," answered Frank. "My name isn't Johnny, though."

"It's immaterial. Johnny is a generic term," said the stranger. "I suppose you have come here to make your fortune."

"I shall be satisfied with a living to begin with," said Frank.

"Where did you come from?"

"A few miles from Hartford."

"Got any relations there?"

"I suppose you were sorry to leave them."

"Not much. Uncle is a pretty good man, but he's fond of money, and aunt is about as mean as they make 'em. They got tired of supporting me, and gave me money enough to get to New York."

"I suppose you have some left," said the stranger, persuasively.

"Twenty-five cents," answered Frank, laughing. "That isn't a very big capital to start on, is it?"

"Is that all you've got?" asked the shabbily dressed stranger, in a tone of disappointment.

"I wish I had ten dollars to give you," said the stranger, thoughtfully.

"Thank you, sir; I wish you had," said Frank, his eyes resting on the dilapidated attire of his benevolent companion. Judging from that, he was not surprised that ten dollars exceeded the charitable fund of the philanthropist.

"My operations in Wall street have not been fortunate of late," resumed the stranger; "and I am in consequence hard up."

"Do you do business in Wall street?" asked Frank, rather surprised.

"Sometimes," was the reply. "I have lost heavily of late in Erie and Pacific Mail, but it is only temporary. I shall soon be on my feet again."

"My career has been a chequered one," continued the stranger. "I, too, as a mere boy, came up from the country to make my fortune. I embarked in trade, and was for a time successful. I resigned to get time to write a play,—a comedy in five acts."

Frank regarded his companion with heightened respect. He was a boy of good education, and the author of a play in his eyes was a man of genius.

"Was it played?" he inquired.

"No; Wallack said it had too many difficult characters for his company, and the rest of the managers kept putting me off, while they were producing inferior plays....