The Teacher Or, Moral Influences Employed in the Instruction and Government of the Young 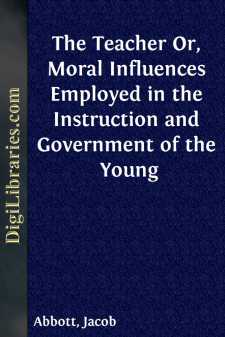 There is a most singular contrariety of opinion prevailing in the community, in regard to the pleasantness of the business of teaching. Some teachers go to their daily task, merely upon compulsion: they regard it as intolerable drudgery. Others love the work: they hover around the school-room as long as they can, and never cease to think, and seldom to talk, of their delightful labors.

Unfortunately there are too many of the former class, and the first object, which, in this work, I shall attempt to accomplish, is to show my readers, especially those who have been accustomed to look upon the business of teaching as a weary and heartless toil, how it happens, that it is, in any case, so pleasant. The human mind is always, essentially, the same. That which is tedious and joyless to one, will be so to another, if pursued in the same way, and under the same circumstances. And teaching, if it is pleasant, animating, and exciting to one, may be so to all.

I am met, however, at the outset, in my effort to show why it is that teaching is ever a pleasant work, by the want of a name for a certain faculty or capacity of the human mind, through which most of the enjoyment of teaching finds its avenue. Every mind is so constituted as to take a positive pleasure in the exercise of ingenuity in adapting means to an end, and in watching their operation;—in accomplishing by the intervention of instruments, what we could not accomplish without;—in devising, (when we see an object to be effected, which is too great for our direct and immediate power) and setting at work, some instrumentality, which may be sufficient to accomplish it.

It is said, that, when the steam engine was first put into operation, such was the imperfection of the machinery, that a boy was necessarily stationed at it, to open and shut alternately the cock, by which the steam was now admitted, and now shut out, from the cylinder. One such boy, after patiently doing his work for many days, contrived to connect this stop-cock with some of the moving parts of the engine, by a wire, in such a manner, that the engine itself did the work which had been entrusted to him; and after seeing that the whole business would go regularly forward, he left the wire in charge, and went away to play.

Such is the story. Now if it is true, how much pleasure the boy must have experienced, in devising and witnessing the successful operation of his scheme; I do not mean the pleasure of relieving himself from a dull and wearisome duty; I do not mean the pleasure of anticipated play; but I mean the strong interest he must have taken in contriving and executing his plan. When, wearied out with his dull, monotonous work, he first noticed those movements of the machinery which he thought adapted to his purpose, and the plan flashed into his mind, how must his eye have brightened, and how quick must the weary listlessness of his employment have vanished. While he was maturing his plan, and carrying it into execution;—while adjusting his wires, fitting them to the exact length, and to the exact position,—and especially, when, at last, he watches the first successful operation of his contrivance,—he must have enjoyed a pleasure, which very few, even of the joyous sports of childhood, could have supplied.

It is not, however, exactly the pleasure of exercising ingenuity in contrivance, that I refer to here; for the teacher has not, after all, a great deal of absolute contriving to do,—or rather his principal business is not contriving. The greatest and most permanent source of pleasure to the boy, in such a case as I have described, is his feeling that he is accomplishing a great effect by a slight effort of his own; the feeling of power; acting through the intervention of instrumentality, so as to multiply his power. So great would be this satisfaction, that he would almost wish to have some other similar work assigned him, that he might have another opportunity to contrive some plan for its easy accomplishment.

Looking at an object to be accomplished, or an evil to be remedied, then studying its nature and extent, and devising and executing some means for effecting the purpose desired, is, in all cases, a source of pleasure; especially when, by the process, we bring to view or to operation, new powers, or powers heretofore hidden, whether they are our own powers, or those of objects upon which we act. Experimenting has a sort of magical fascination for all. Some do not like the trouble of making preparations, but all are eager to see the results. Contrive a new machine, and every body will be interested to witness, or to hear of its operation;—develope any heretofore unknown properties of matter, or secure some new useful effect, from laws which men have not hitherto employed for their purposes, and the interest of all around you will be excited to observe your results;—and especially, you will yourself take a deep and permanent pleasure, in guiding and controlling the power you have thus obtained....