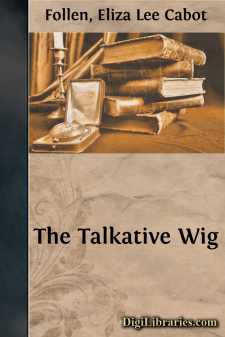 "Pray, dear Mother," said the boys, "tell us what else you heard in the old garret."

"You know," said she, "it was on a rainy Sunday when my mother sent me up there with my book, Pilgrim's Progress. This book always delighted me, and set my fancy to work in some way or other.

After reading a while, I began to look at the queer old things in the garret. Pussy began to purr louder and louder, and at last I fell again into the same dreamy sleep that I was in at first.

Presently I heard the same confused sound which I heard before when the old tenants of the garret began to speak. There seemed also to be a slight motion among them, and a sort of mysterious appearance came over the whole apartment, as if they were all living, though very shadowy beings. Presently I heard the creak of the curling tongs, and he uttered these words:—

"I think we have all been wronged by our friend the wig; he approved of our all relating our own histories, and promised that, after we had done so, he would give us his, frankly and truly, as we have done; instead of that he, as well as the rest of us, fell asleep when our friend spinning wheel related her story; and, when we all waked up, he did not fulfil his promise. I move that he be requested now to give us a faithful account of his whole life, till he was consigned with us to this dark, gloomy old place. I probably have been more intimately acquainted with him than any one present; for once or twice I have assisted in smoothing, or rather frizzing, his ruffled hairs, and making him fit for company; and, with your leave, my friends, I urge him in your name to relate his history." A sort of hum of approbation sounded through the long, dark old garret, and then the wig spoke.

"Friend Frizzle is right: I did agree to relate my adventures, but I said I would wait till all had told their stories; now, here are two of this brilliant company that have not said one word of themselves, that comical coat and that old cloak; after they have related their history I will relate mine. The wig hitched a little on his block, and was silent.

"I am ready," said the coat, "to tell all I know of myself, and I shall not keep you long, I trust. My friend the baize gown and I had the same origin on the back of a sheep, only I was of a nicer texture, and had, from my earliest days, a more refined character; and, of course, was used for higher purposes. Major Sword there may know perhaps that I had as much to do with making the major of Cadets as he had, only I did not make people run when they looked at me, as he says he did.

I was originally of the most delicate white, and I was made into one of the very first coats that ever appeared on the parade as one of the Governor's guards. I think I did more to make the major than my Lord Sword did. Think of a major without a coat! He would not be a major, for a moment. He would be hooted at. Now, even were he without a sword, and had me, such as I once was, on his back, he would still be known as a major of the Cadets."