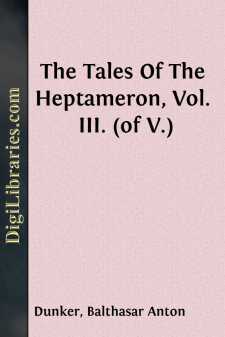 Pauline, being in love with a gentleman no less than he was with her, and finding that he, because forbidden ever again to speak with her, had entered the monastery of the Observance, gained admittance for her own part into the convent of St. Clara, where she took the veil; thus fulfilling the desire she had conceived to bring the gentleman's love and her own to a like ending in respect of raiment, condition and manner of life. (1)

In the time of the Marquis of Mantua, (2) who had married the sister of the Duke of Ferrara, there lived in the household of the Duchess a damsel named Pauline, who was greatly loved by a gentleman in the Marquis's service, and this to the astonishment of every one; for being poor, albeit handsome and greatly beloved by his master, he ought, in their estimation, to have wooed some wealthy dame, but he believed that all the world's treasure centred in Pauline, and looked to his marriage with her to gain and possess it.

1 The incidents related in this tale appear to have takenplace at Mantua and Ferrara. M. de Montaiglon, however,believes that they happened at Lyons, and that Margaret laidthe scene of her story in Italy, so that the personages sherefers to might not be identified. The subject of the taleis similar to that of the poem called L'Amant renduCordelier à l'Observance et Amour, which may perhaps havesupplied the Queen of Navarre with the plot of hernarrative.—M. and Ed.2 This was John Francis II. of Gonzaga, who was born in1466, and succeeded his father, Frederic I., in 1484. Hetook an active part in the wars of the time, commanding theVenetian troops when Charles VIII. invaded Italy, andafterwards supporting Ludovico Sforza in the defence ofMilan. When Sforza abandoned the struggle against France,the Marquis of Mantua joined the French king, for whom heacted as viceroy of Naples. Ultimately, however, he espousedthe cause of the Emperor Maximilian, when the latter was atwar with Venice in 1509, and being surprised and defeatedwhile camping on the island of La Scala, he fled in hisshirt and hid himself in a field, where, by the treachery ofa peasant who had promised him secrecy, he was found andtaken prisoner. By the advice of Pope Julius II., theVenetians set him at liberty after he had undergone a year'simprisonment. In 1490 John Francis married Isabella d'Esté,daughter of Hercules I. Duke of Ferrara, by whom he hadseveral children. He died at Mantua in March 1519, his widowsurviving him until 1539. Among the many dignities acquiredby the Marquis in the course of his singularly chequeredlife was that of gonfalonier of the Holy Church, conferredupon him by Julius II.—L. and En.

The Marchioness, who desired that Pauline should through her favour make a more wealthy marriage, discouraged her as much as she could from wedding the gentleman, and often hindered the two lovers from talking together, pointing out to them that, should the marriage take place, they would be the poorest and sorriest couple in all Italy....