The Tale of Kiddie Katydid 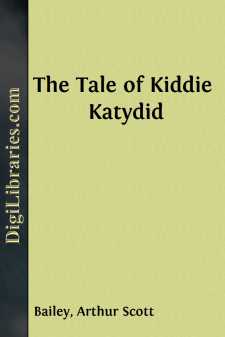 Whoever Katy was, and whatever she might have done, nobody in Pleasant Valley knew anything about her except Kiddie Katydid and his numerous and noisy family.

To be sure, many of the wild folk—and the people in the farmhouse, too—remembered hearing her name mentioned the year before.

But they had quite forgotten about her, until August came and Kiddie Katydid and his relations brought her to their minds once more.

However, there were always so many others to drown any such puzzling statement with their shrill clamor that Katy really did do it (whatever it was!) that nobody paid much attention to those few who didn't quite agree.

On warm, dry, midsummer nights the Katydids all made a terrific racket. But there wasn't one of them that outdid Kiddie. He always had the best time when he was making the most noise. And since he liked to station himself in a tree near Farmer Green's house, his uproar often rose plainly above that of the other Katydids.

Lying in bed in his little room under the eaves, Johnnie Green sometimes wished that Kiddie would keep quiet long enough to let him go to sleep in peace.

To be sure, the balmy breezes wafted many other night sounds through Johnnie's open window. From near-by came Chirpy Cricket's cheerful piping. And in the distant swamp the musical Frog family held a singing party every evening. Johnnie Green liked to hear them. But he objected strongly to the weird hooting and horrid laughter of Solomon Owl, who left the hemlock woods after dark to hunt for field mice.

As for Kiddie Katydid, he paid little attention to any other of the night cries. No matter what anybody else said, he solemnly hurled back at him that neverending refrain, Katy did, Katy did; she did, she did!

You would have thought, if you had heard Kiddie, that somebody had disputed his statement. But such was not the case at all. Since no one except the Katydids knew anything about the mysterious Katy, nobody was able to say truthfully that she didn't do it. In fact, the whole affair was a great secret, so far as outsiders were concerned. And one night Johnnie Green even thrust his head out of the window and cried impatiently:

"All right! All right! I admit that Katy did it. And now do please keep still!"

Of course, his plea failed to silence Kiddie Katydid. But it relieved Johnnie Green's mind and made him feel better, anyhow.

Kiddie told his own people about Johnnie's outburst. And they all agreed that it was a rude thing to do.

"Doesn't he know," they asked, "that the night belongs to us?"

It must not be supposed that all of Kiddie Katydid's family made the same neverending din at night. Actually it was only the gentlemen that so amused themselves....