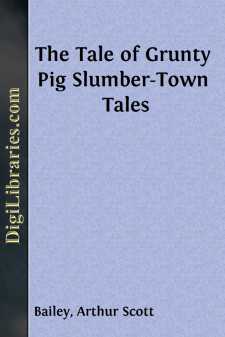 He was the smallest of seven children. At first his mother thought she would call him "Runty." But she soon changed her mind about that; for she discovered that even if he was the runt of the family, he had the loudest grunt of all. So the good lady made haste to slip a G in front of the name "Runty."

"There!" she exclaimed. "'Grunty' is a name that you ought to be proud of. It calls attention to your best point. And if you keep on making as much noise in the world as you do now, maybe people won't notice that you're a bit undersized. You certainly sound as big as any little shote I ever saw or heard."

So that was settled—though Grunty Pig didn't care one way or another. He seemed to be interested in nothing but food. There is no doubt that he would have been willing to change his name a dozen times a day for the slight bribe of a drink of warm milk.

His mother sometimes said that he had the biggest appetite—as well as the loudest grunt—of all her seven children. And she was glad that he ate well, because food was the very thing that would make him grow.

"You won't always be runty, Grunty, if you eat a plenty," Mrs. Pig often told him. And then he would grunt, as if to say, "You don't need to urge me. Just give me a chance!"

Grunty Pig soon learned that being the smallest of the family had one sad drawback. His brothers and sisters (all bigger than he!) could crowd him away from the feeding trough. And they not only could; but they often did. Unless Grunty reached the trough among the first, there was never a place left where he could squirm in. If he tried to eat at one end of the trough he was sure to be shouldered away and go hungry.

So whenever he did succeed in getting the first taste of a meal he took pains to plant himself in the exact middle of the trough. Then there would be three other youngsters on each side of him, all crowding towards him. And though he found it a bit hard to breathe under such a squeezing, at least he got his share of the food.

Poor Mrs. Pig! Her children had frightful manners. Though she talked and talked to them about not crowding, and about eating slowly, and about eating noiselessly, the moment their food was poured into their trough they forgot everything their mother had said.

That is, all but Grunty Pig! If he happened to be left out in the cold, so to speak, and had to stand and look on while his brothers and sister stuffed themselves, he couldn't help remembering his mother's remarks about manners.

"It's awful to watch them!" he would gurgle. "I don't see how they can be so boorish." He thought there was no sadder sight than his six brothers and sisters jostling one another over their food, while he couldn't find a place to push in among them.

II A NEW WAY TO EAT

One thing, especially, distressed Mrs. Pig. Her children would put their fore feet right into the trough when they ate their meals out of it. Nothing she said to them made the slightest difference. Even when she told them that they were little pigs they didn't seem to care....