The Tale of Brownie Beaver 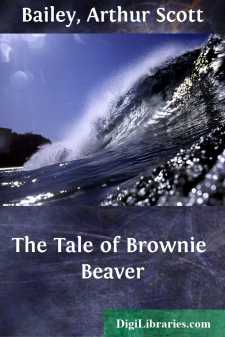 A QUEER PLACE TO LIVE

The village near one end of Pleasant Valley where Farmer Green often went to sell butter and eggs was not the only village to be seen from Blue Mountain. There was another which Farmer Green seldom visited, because it lay beyond the mountain and was a long distance from his house. Though he owned the land where it stood, those that lived there thought they had every right to stay there as long as they pleased, without being disturbed.

It was in this village that Brownie Beaver and his neighbors lived. It was a different sort of town, too, from the one where Farmer Green went each week. Over beyond Blue Mountain all the houses were built in a pond. And all their doors were under water. But nobody minded that because—like Brownie Beaver—everybody that dwelt there was a fine swimmer.

Years and years before Brownie's time his forefathers had come there, and finding that there were many trees in the neighborhood with the sort of bark they liked to eat—such as poplars, willows and box elders—they had decided that it was a good place to live. There was a small stream, too, which was really the beginning of Swift River. And by damming it those old settlers made a pond in which they could build their houses.

They had ideas of their own as to what a house should be like—and very good ideas they were—though you, perhaps, might not care for them at all. They wanted their houses to be surrounded by water, because they thought they were safer when built in that manner. And they always insisted that a door leading into a house should be far beneath the surface of the water, for they believed that that made a house safer too.

To you such an idea may seem very strange. But if you were chased by an enemy you might be glad to be able to swim under water, down to the bottom of a pond, and slip inside a door which led to a winding hall, which in its turn led upwards into your house.

Of course, your enemy might be able to swim as well as you. But maybe he would think twice—or even three times—before he went prowling through your crooked hall. For if you had enormous, strong, sharp teeth—with which you could gnaw right through a tree—he would not care to have you seize him as he poked his head around a corner in a dark passage of a strange house.

It was in a house of that kind that Brownie Beaver lived. And he built it himself, because he said he would rather have a neat, new house than one of the big, old dwellings that had been built many years before, when his great-great-grandfather had helped throw the dam across the stream.

The dam was there still. It was so old that trees were growing on it. And there was an odd thing about it: it was never finished. Though Brownie Beaver was a young chap, he worked on the dam sometimes, like all his neighbors. You see, the villagers kept making the dam wider. And since it was built of sticks and mud, the water sometimes washed bits of it away: so it had to be kept in repair.

If Brownie Beaver and his friends had neglected their dam, they would have waked up some day and found that their pond was empty; and without any water to hide their doorways they would have been safe no longer....