The Sympathy of Religions 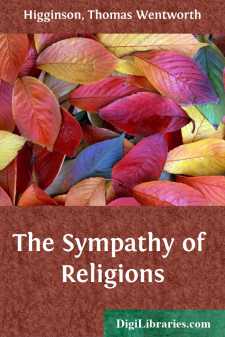 Our true religious life begins when we discover that there is an Inner Light, not infallible but invaluable, which “lighteth every man that cometh into the world.” Then we have something to steer by; and it is chiefly this, and not an anchor, that we need. The human soul, like any other noble vessel, was not built to be anchored, but to sail. An anchorage may, indeed, be at times a temporary need, in order to make some special repairs, or to take fresh cargo in; yet the natural destiny of both ship and soul is not the harbor, but the ocean; to cut with even keel the vast and beautiful expanse; to pass from island on to island of more than Indian balm, or to continents fairer than Columbus won; or, best of all, steering close to the wind, to extract motive power from the greatest obstacles. Men must forget the eternity through which they have yet to sail, when they talk of anchoring here upon this bank and shoal of time. It would be a tragedy to see the shipping of the world whitening the seas no more, and idly riding at anchor in Atlantic ports; but it would be more tragic to see a world of souls fascinated into a fatal repose and renouncing their destiny of motion.

And as with individuals, so with communities. The great historic religions of the world are not so many stranded hulks left to perish. The best of them are all in motion. All over the world the divine influence moves men. There is a sympathy in religions, and this sympathy is shown alike in their origin, their records, and their progress. Men are ceasing to disbelieve, and learning to believe more. I have worshiped in an Evangelical church when thousands rose to their feet at the motion of one hand. I have worshiped in a Roman Catholic church when the lifting of one finger broke the motionless multitude into twinkling motion, till the magic sign was made, and all was still once more. But I never for an instant have supposed that this concentrated moment of devotion was more holy or more beautiful than when one cry from a minaret hushes a Mohammedan city to prayer, or when, at sunset, the low invocation, “Oh! the gem in the lotus—oh! the gem in the lotus,” goes murmuring, like the cooing of many doves, across the vast surface of Thibet. True, “the gem in the lotus” means nothing to us, but it means as much to the angels as “the Lamb of God,” for it is a symbol of aspiration.

Every year brings new knowledge of the religions of the world, and every step in knowledge brings out the sympathy between them. They all show the same aim, the same symbols, the same forms, the same weaknesses, the same aspirations. Looking at these points of unity, we might say there is but one religion under many forms, whose essential creed is the Fatherhood of God, and the Brotherhood of Man,—disguised by corruptions, symbolized by mythologies, ennobled by virtues, degraded by vices, but still the same. Or if, passing to a closer analysis, we observe the shades of difference, we shall find in these varying faiths the several instruments which perform what Cudworth calls “the Symphony of Religions.” And though some may stir like drums, and others soothe like flutes, and others like violins command the whole range of softness and of strength, yet they are all alike instruments, and nothing in any one of them is so wondrous as the great laws of sound which equally control them all.

“Amid so much war and contest and variety of opinion,” said Maximus Tyrius, “you will find one consenting conviction in every land, that there is one God, the King and Father of all.” “God being one,” said Aristotle, “only receives various names from the various manifestations we perceive.” “Sovereign God,” said Cleanthes, in that sublime prayer which Paul quoted, “whom men invoke under many names, and who rulest alone, ... it is to thee that all nations should address themselves, for we all are thy children.” So Origen, the Christian Father, frankly says that no man can be blamed for calling God’s name in Egyptian, nor in Scythian, nor in such other language as he best knows.

To say that different races worship different Gods, is like saying that they are warmed by different suns....