The Swedish Revolution Under Gustavus Vasa 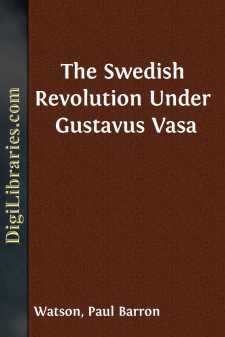 NO name in history lies deeper in Swedish hearts than the name Gustavus Vasa. Liberator of Sweden from the yoke of Denmark, and founder of one of the foremost dynasties of Europe, his people during more than three centuries have looked back fondly to the figure of their great ruler, and cherished with tender reverence every incident in his romantic history. This enthusiasm for Gustavus Vasa is more than sentiment; it belongs to him as leader in a vast political upheaval. When Gustavus came upon the stage, the Swedish people had long been groaning under a foreign despotism. During more than a century their political existence had been ignored, their rights as freemen trampled in the dust. They had at last been goaded into a spirit of rebellion, and were already struggling to be free. What they most needed was a leader with courage to summon them to arms, and with perseverance to keep them in the field. Possessing these traits beyond all others, Gustavus called his people forth to war, and finally brought them through the war to victory. This revolution extended over a period of seven years,—from the uprising of the Dalesmen in 1521 to the coronation of Gustavus in 1528. It is a period that should be of interest, not only to the student of history, but also to the lover of romance. In order to render the exact nature of the struggle clear, I have begun the narrative at a time considerably before the revolution, though I have not entered deeply into details till the beginning of the war in 1521. By the middle of the year 1523, when Gustavus was elected king, actual warfare had nearly ceased, and the scenes of the drama change from the battle-field to the legislative chamber. In this period occurred the crowning act of the revolution; namely, the banishment of the Romish Church and clergy.

The history of the Swedish Revolution has never before been written in the English language. Even Gustavus Vasa is but little known outside his native land. Doubtless this is due in large measure to the difficulties which beset a study of the period. It is not a period to which the student of literature can turn with joy. One who would know Gustavus well must traverse a vast desert of dreary reading, and pore over many volumes of verbose despatches before he can find a drop of moisture to relieve the arid soil. Sweden in the early part of the sixteenth century was not fertile in literary men. Gustavus himself, judged by any rational standard, was an abominable writer. His despatches are in number almost endless and in length appalling. Page after page he runs on, seemingly with no other object than to use up time. Often a document covers four folios, which might easily have been compressed into a single sentence. Such was the habit of the age. A simple letter from a man to his wife consisted mainly of a mass of stereotyped expressions of respect. Language was used apparently to conceal vacuity of mind. Toward the close of the monarch's reign there was a marked improvement in literary style, and some few works of that period possess real worth. These have recently been printed, and as a rule have been edited with considerable care. The king's despatches are also being systematically printed by the authorities of the Royal Archives at Stockholm, and the cloud of ignorance which has hitherto hung over the head of Sweden's early monarch is lifting fast. The tenth volume of the king's despatches, known as Gustaf I.'s registratur has now been published, carrying this contemporary transcript of the king's letters down to the summer of 1535. The only documents bearing on the Swedish Revolution and not yet published, are the MSS. known as Gustaf I.'s rådslagar, Gustaf I.'s acta historica, and Gustaf I.'s bref med bilagor,—all to be found in the Royal Archives at Stockholm,—and the MSS. known as the Palmskiöld samlingar in the Upsala Library....