The Swedish-Norwegian Union Crisis A History with Documents 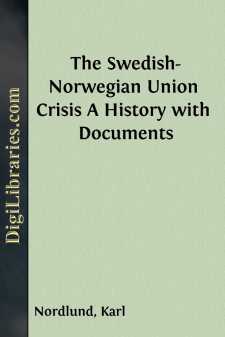 The object of the Union dispute. Not till the present day has the Swedish-Norwegian Union Crisis presented itself in the eyes of Europe in a thoroughly acute phase. Its origin, in reality, dates as far back as the foundation of the Union itself.

The efforts to give Norway a better position in the Union. The original cause of the agitating union disputes has been that Sweden, from the very commencement of the Union, has internationally borne the responsibility for the same, in other words, conducted the political affairs of both Kingdoms. The inequality produced hereby, the Norwegians on their part have striven to efface. Sweden has also for a long time shown herself willing to establish full equality in the Union, at the same time that she has accommodated herself to Norway in questions of detail. As far back as 1835 it was acknowledged, on the part of Sweden, that Norway’s position in the Union was not in accordance with the claims of equity. Thus by a Royal Decree that year the Norwegian Minister of State at Stockholm was admitted into the Swedish so-called Ministerial Council to take part in foreign matters which concerned Norway. In 1839 the first great Union-Committee was formed, and both in this one, and two later — the last 1895-98 — Norway was offered from the Swedish side complete equality in the Union on certain conditions. Added to this Sweden has on several occasions granted partial concessions. Some have been accepted by Norway — as for instance the law passed in 1844 concerning equality in Government Symbols etc. etc. — others again were refused — as the offer in 1885 and 1891 of increased influence in the administration of Foreign affairs. If offers   of equality worded in more general terms are added — as in 1893 and during the present year —, Nansen’s characterising Sweden’s Union policy as »90 years’ labour to procure a supremacy for Sweden», — ought to appear in its true colours.

Unauthorized accusations against Sweden for endeavouring to gain the supremacy. The accusations against Sweden for endeavouring to acquire the supremacy have, time after time, arisen from a mixture of various matters, partly the different conceptions of the legal character of the existing Union, partly the different programmes for the reformation of the Union.

Owing to the very indistinct and confused wording in the legal documents of the Act of Union the Swedish and Norwegian conceptions of the Union itself have finally become so antagonistic to each other, that the unionistic transactions have, in an excessive degree, taken the character of a continual judicial process, and the real questions have been more or less ignored. Swedish Policy on its part has always maintained that Sweden’s supremacy in the Union is based on legal grounds. It has especially insisted that the administration of Foreign affairs was, from the first, placed in Sweden’s hands, and this Swedish standpoint has also   been acknowledged as the right one by the most eminent of Norwegian writers on State law. But of late those on the Norwegian Left Side have made stronger and stronger efforts to prove, that the order existed on no legal grounds, that Norway, as a Sovereign Kingdom, had the right, for instance, to create an entire Foreign Office of its own....