The Surprising Adventures of Baron Munchausen 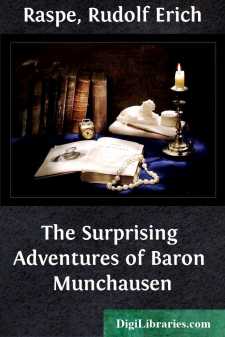 It is a curious fact that of that class of literature to which Munchausen belongs, that namely of Voyages Imaginaires, the three great types should have all been created in England. Utopia, Robinson Crusoe, and Gulliver, illustrating respectively the philosophical, the edifying, and the satirical type of fictitious travel, were all written in England, and at the end of the eighteenth century a fourth type, the fantastically mendacious, was evolved in this country. Of this type Munchausen was the modern original, and remains the classical example. The adaptability of such a species of composition to local and topical uses might well be considered prejudicial to its chances of obtaining a permanent place in literature. Yet Munchausen has undoubtedly achieved such a place. The Baron's notoriety is universal, his character proverbial, and his name as familiar as that of Mr. Lemuel Gulliver, or Robinson Crusoe, mariner, of York. Condemned by the learned, like some other masterpieces, as worthless, Munchausen's travels have obtained such a world-wide fame, that the story of their origin possesses a general and historic interest apart from whatever of obscurity or of curiosity it may have to recommend it.

The work first appeared in London in the course of the year 1785. No copy of the first edition appears to be accessible; it seems, however, to have been issued some time in the autumn, and in the Critical Review for December 1785 there is the following notice: "Baron Munchausen's Narrative of his Marvellous Travels and Campaigns in Russia. Small 8vo, IS. (Smith). This is a satirical production calculated to throw ridicule on the bold assertions of some parliamentary declaimers. If rant may be best foiled at its own weapons, the author's design is not ill-founded; for the marvellous has never been carried to a more whimsical and ludicrous extent." The reviewer had probably read the work through from one paper cover to the other. It was in fact too short to bore the most blasé of his kind, consisting of but forty-nine small octavo pages. The second edition, which is in the British Museum, bears the following title; "Baron Munchausen's Narrative of his Marvellous Travels and Campaigns in Russia; humbly dedicated and recommended to country gentlemen, and if they please to be repeated as their own after a hunt, at horse races, in watering places, and other such polite assemblies; round the bottle and fireside. Smith. Printed at Oxford. 1786." The fact that this little pamphlet again consists of but forty-nine small octavo pages, combined with the similarity of title (as far as that of the first edition is given in the Critical Review), publisher, and price, affords a strong presumption that it was identical with the first edition. This edition contains only chapters ii., iii., iv., v., and vi. (pp. 10-44) of the present reprint. These chapters are the best in the book and their substantial if peculiar merit can hardly be denied, but the pamphlet appears to have met with little success, and early in 1786 Smith seems to have sold the property to another bookseller, Kearsley....