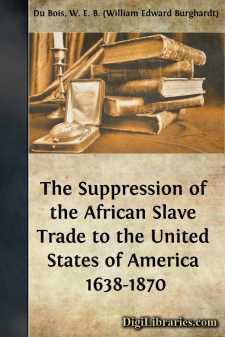 Add to My Favorites
Published: 10 years ago
Downloads: 82
Rating: (0 Votes)

Chapter I INTRODUCTORY. 1. Plan of the Monograph. 2. The Rise of the English Slave-Trade.

1. Plan of the Monograph. This monograph proposes to set forth the efforts made in the United States of America, from early colonial times until the present, to limit and suppress the trade in slaves between Africa and these shores.

The study begins with the colonial period, setting forth in brief the attitude of England and, more in detail, the attitude of the planting, farming, and trading groups of colonies toward the slave-trade. It deals next with the first concerted effort against the trade and with the further action of the individual States. The important work of the Constitutional Convention follows, together with the history of the trade in that critical period which preceded the Act of 1807. The attempt to suppress the trade from 1807 to 1830 is next recounted. A chapter then deals with the slave-trade as an international problem. Finally the development of the crises up to the Civil War is studied, together with the steps leading to the final suppression; and a concluding chapter seeks to sum up the results of the investigation. Throughout the monograph the institution of slavery and the interstate slave-trade are considered only incidentally.

Sir John Hawkins's celebrated voyage took place in 1562, but probably not until 1631 did a regular chartered company undertake to carry on the trade. This company was unsuccessful, and was eventually succeeded by the "Company of Royal Adventurers trading to Africa," chartered by Charles II. in 1662, and including the Queen Dowager and the Duke of York. The company contracted to supply the West Indies with three thousand slaves annually; but contraband trade, misconduct, and war so reduced it that in 1672 it surrendered its charter to another company for £34,000. This new corporation, chartered by Charles II. as the "Royal African Company," proved more successful than its predecessors, and carried on a growing trade for a quarter of a century.

In 1698 Parliamentary interference with the trade began. By the Statute 9 and 10 William and Mary, chapter 26, private traders, on payment of a duty of 10% on English goods exported to Africa, were allowed to participate in the trade. This was brought about by the clamor of the merchants, especially the "American Merchants," who "in their Petition suggest, that it would be a great Benefit to the Kingdom to secure the Trade by maintaining Forts and Castles there, with an equal Duty upon all Goods exported." This plan, being a compromise between maintaining the monopoly intact and entirely abolishing it, was adopted, and the statute declared the trade "highly Beneficial and Advantageous to this Kingdom, and to the Plantations and Colonies thereunto belonging."

Having thus gained practically free admittance to the field, English merchants sought to exclude other nations by securing a monopoly of the lucrative Spanish colonial slave-trade....