The Supplies for the Confederate Army, how they were obtained in Europe and how paid for. 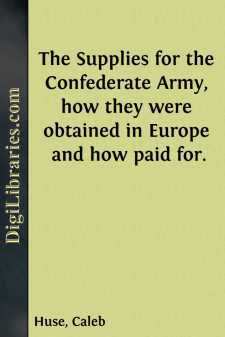 my return in May, 1860, from a six months' leave of absence spent in Europe, I found an appointment as professor of chemistry and commandant of cadets in the University of Alabama awaiting my acceptance. During my absence the President of the University and a committee of the Board of Trustees visited West Point and the Virginia Military Institute and, pleased with the discipline of both institutions, decided to adopt the military system, and applied to Colonel Delafield, then the Superintendent at West Point, for an officer to start them. Col. Delafield gave them my name but was unable to say whether or not I would resign from the army. I was then a first lieutenant of artillery; and, as such, was on the rolls of the garrison of Fort Sumter.

I accepted the position and began my duties in September. My leave of absence had expired in May; but the authorities of the University, fearing that I might regret severing irrevocably my connection with the army—which I had entered as a cadet at sixteen—obtained from the Secretary of War an extension of the leave till May, 1861, when I was to resign if all was satisfactory at that time.

It is proper to mention here that the introduction of military drill and discipline at the State University had no connection whatever with any secession movement in Alabama, and the fact that a Massachusetts-born man and of Puritan descent was selected to inaugurate the system, will, or ought to be, accepted as confirmatory of this assertion.

Discipline was almost at an end at the University, and in seeking ways and means for restoring it, the attention of the Faculty and Trustees was directed to the Virginia Military Institute which had been in successful operation for about fifty years. As this institution had been organized by a graduate of West Point, and in some respects resembled the United States Military Academy, it was hoped that in Alabama good results might be secured by the adoption of similar methods.

Military drill is taught at the present time in many schools and colleges, but the intention of the Alabama University authorities was not merely to drill students, but to hold them under military restraint, as is effectually done at West Point, and, I may add, as cannot be done in any college designed to qualify young men to become civilian members of a great republic.

West Point and Annapolis have proved themselves noble institutions for the purpose for which they were designed—that of training young men to become officers over other men—but the mission of these schools is not to fit young men for civil life. Their methods cannot be grafted upon literary or technical civil institutions, and it is not desirable that they should be applied to civil colleges or schools of any kind. But the University of Alabama was a military college so far as concerned discipline, and to this end I was given a Colonel's commission by the Governor of the State, with two assistants, one a major, the other a captain. Tents, arms and infantry equipments were purchased of the United States Government, and a uniform similar to that of the West Point cadets was adopted. The students were assembled on the first of September, and a camp established on the University grounds. Drills were inaugurated at once and regular camp duties were required and performed.

Everything seemed to be progressing very satisfactorily till one day, some three weeks after the pitching of the camp, the President of the University (Dr. Garland) desired to see me at his office. On entering I found him and a trusted professor awaiting my coming, with disturbed looks. No time was wasted in the preliminaries; Dr. Garland came to the point at once by telling me that there was a mutiny brewing in my camp which it would be impossible for me to quell. He then explained that the cadets were dissatisfied because I was a northern-born man; that they called me a d——d Yankee, and intended running me out of the State. He thought they would be successful, for the ringleaders were old students who had given a great deal of trouble before I came, and, what made the matter worse, these students were sons of influential men in the State, and the mothers of the mutineers were encouraging them.

I asked if any of the Trustees or the Faculty wished me to resign and was assured of the contrary. I then said that, but for one thing, I should have no hesitation in resigning....