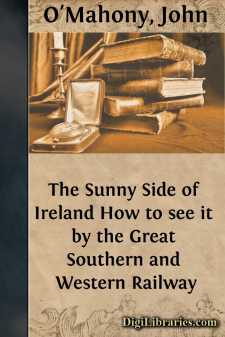 Travelling through Ireland in the good old times was at best a precarious and inconvenient diversion. Those who had to do so regretted the necessity, and those who had not, praised Providence. Many "persons of quality," to use Dr. Johnson's phrase, have written narratives of their adventures and experiences in "the most damnable country." No man of position, even early in the nineteenth century, would dream of travelling threescore miles from his residence without having signed and sealed his last will and testament. The highways were beset by "Gentlemen of the Road," such as that fascinating felon, "Brennan on the Moor," of whom the ballad tells—

"A brace of loaded pistols he carried night and day."

The coach roads were dangerous, the stage was deplorable, and everything but the scenery unpleasant. The interior and west of the country were connected with Dublin by canals cut in the time of the Irish Parliament, which followed the enterprise of the Dutch. They were looked upon at the time as feats of engineering skill, somewhat in the light that we view the Suez or Panama Canals to-day. Neville, the engineer, was the recipient of extravagant encomiums from the Lords and Commons, and his fame is embalmed in a street ballad which sings the praise of—

"Bold Neville,Who made the streams run levelIn that bounding riverCalled the Grand Canal."

Nowadays we have changed all that, and Neville and his skill are as little remembered in Ireland as the military-road cutter in Scotland, of whom, to show that Ireland had not the monopoly in "bulls," an English admirer wrote:—

"If you had seen those roads before theyWere made,You would hold up your hands and blessGeneral Wade."

A poor Italian boy—Charles Bianconi—who tramped through the country as a print-seller, was the first, in the days of Waterloo, in the south of Ireland, to begin really that healthy competition with the mail-coaches which made straight the way for the Iron Horse.

The Great Southern and Western Railway was incorporated in 1845. Mr. Under-Secretary Drummond, the English statesman who got closest to the Irish heart, was identified with the construction of the line.

Year after year the Company prospered and increased, gradually absorbing the smaller lines adjoining it until the year 1901, when it amalgamated the only two other systems of broad gauge lines in their district which had remained independent. Practically the two provinces of Munster and Connaught are now knit together by the great network of railway lines which comprise the Great Southern and Western System. The total length is about 1,100 miles. The main line stretches from Dublin, through Cork, to Queenstown, forming the route for the American Mails and the great transatlantic passenger traffic. Branches extend to Waterford, Limerick, Killarney, and Kerry, and every place of importance in the South of Ireland, while in the west the line extends from Tralee, through Limerick, to Sligo....