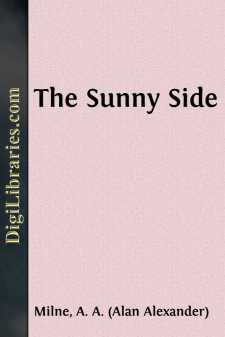 My publisher wants me to apologize for—"introduce" was the kindly word he used—this collection of articles and verses from Punch. I do so with pleasure.

Among the many interests of a long and varied career—

No, I don't think I shall begin like that.

Really it is very difficult, you know. I wrote these things for a number of years, and—well, here they are. But just to say "Here they are" is to be too informal for my publisher. He wants, not a casual introduction, but a presentation. Let me tell you a little story instead.

When war broke out, I had published three of these books in England, the gleanings of nine years' regular work for Punch. There are, I understand, a few Americans who read Punch, and it was suggested to me that a suitable collection of articles from these three books might have some sort of American sale. So I made such a collection, leaving out the more topical and allusive sketches, and including those with a more general appeal. I called the result "Happy Days"—an attractive title, you will agree—and in 1915 a New York publisher was found for it.

This is a funny story; at least it appeals to me; so I won't remind myself of the number of copies which we sold. That was tragedy, not comedy. The joke lay in one of the few notices which the book received from the press. For a New York critic ended his review of "Happy Days" with these immortal words:

"Mr. Milne is at present in the trenches facing the German bullets, so this will probably be his last book."

You see now why an apology is necessary. Here we are, seven years later, and I am still at it.

But at any rate, it is the last of this sort of book. As I said in a foreword to the English edition: "It is the last time because this sort of writing depends largely upon the irresponsibility and high spirits of youth for its success, and I want to stop before (may I say 'before'?) the high spirits become mechanical and the irresponsibility a trick. Perhaps the fact that this collection is final will excuse its air of scrappiness. Odd Verses have crept in on the unanswerable plea that, if they didn't do it now, they never would; War Sketches protested that I shouldn't have a book at all if I left them out; an Early Article, omitted from three previous volumes, paraded for the fourth time with such a pathetic 'I suppose you don't want me' in its eye that it could not decently be rejected. So here they all are."

One further word of explanation. You may find the first section of this book—"Oranges and Lemons"—a little difficult. The characters of it are old friends to that limited public which reads my books in England; their earlier adventures have been told in those previous volumes (and purposely omitted from "Happy Days" as being a little too insular). I feel somehow that strangers will not be on such easy terms with them, and I would recommend that you approach them last. By that time you will have discovered whether you are in a mood to stop and listen to their chatter, or prefer to pass them by with a nod....