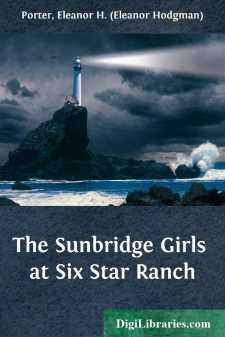 The Reverend Thomas Wilson's sister, Miss Sophronia, had come to Sunbridge on a Tuesday evening late in June to make her brother's family a long-promised visit. But it was not until the next morning that she heard something that sent her to her sister-in-law in a burst of astonishment almost too great for words.

"For pity's sake, Mary, what is this I hear?" she demanded. "Edith insists that her cousin, Cordelia, is going to Texas next week—to Texas!—Cordelia!"

"Yes, she is, Sophronia," replied the minister's wife, trying to make her answer sound as cheerful and commonplace as she could, and as if Texas were in the next room. (It was something of a trial to Mrs. Thomas Wilson that her husband's sister could not seem to understand that she, a minister's wife for eighteen years and the mother of five children, ought to know what was proper and right for her orphaned niece to do—at least fully as much as should a spinster, who had never brought up anything but four cats and a parrot!) "Edith is quite right. Cordelia is going to Texas next week."

"But, Mary, are you crazy? To let a child like that go all the way from here to Texas—one would think New Hampshire and Texas were twenty miles apart!"

"Cordelia isn't exactly a child, Sophronia, you must remember that. She was sixteen last November; and she's very self-reliant and capable for her age, too. Besides, she isn't going alone, you know."

"Alone!" exclaimed Miss Sophronia. "Mary, surely, the rest that Edith said isn't true! Those other girls aren't going, too, are they?—Elsie Martin, and that flyaway Tilly Mack, and all?"

"I think they are, Sophronia."

"Well, of all the crazy things anybody ever heard of!" almost groaned the lady. "Mary, what are you thinking of?"

"I'm thinking of Cordelia," returned the minister's wife, with a spirit that was as sudden as it was unusual. "Sophronia, for twelve years, ever since she came to me, Cordelia has been just a Big Sister in the family; and she's had to fetch and carry and trot and run her little legs off for one after another of the children, as well as for her uncle and me. You know how good she is, and how conscientious. You know how anxious she always is to do exactly right. She's never had a playday, and I'm sure she deserves one if ever a girl did! Vacations to her have never meant anything but more care and more time for housework."

Mrs. Wilson paused for breath, then went on with renewed vigor.

"When this chance came up, Tom and I thought at first, of course, just as you did, that it was quite out of the question; but—well, we decided to let her go. And I haven't been sorry a minute since. She's Tom's only brother's child, but we've never been able to do much for her, as you know. We can let her have this chance, though. And she's so happy—dear child!"

"But what is it? How did it happen? Who's going? Edith's story sounded so absurd to me I could make precious little out of it. She insisted that the 'Happy X's' were going."