The Summer Holidays A Story for Children 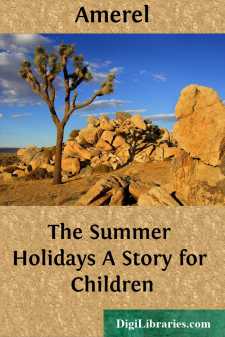 Mr. Harvey's two sons, Thomas and John, were very anxious for their cousin, Samuel Reed, to spend the August holidays with them. His father said that he might; and when school was closed for the season, Samuel bade his father good bye, and was soon in the carriage, driving toward Uncle Harvey's country seat.

The boys had not seen each other since New Year's day. It was a happy meeting when Samuel jumped out of the carriage, by the gate leading from the main road up to Mr. Harvey's house; for there his uncle, and two cousins, were waiting for him. Thomas and John, each grasped a hand, while their father led the way to the house. "We were afraid you were not coming," said John. "How tall you have grown since Christmas," exclaimed Thomas. "Were you not tired of being in the hot city such weather as this?" Samuel said that he was; and then they all entered the house, while the driver brought in Samuel's baggage.

It was about five o'clock in the afternoon when Samuel reached his uncle's house. He was taken into a small parlor, which opened upon a garden where many flowers were in bloom. It was a warm day, but this room was cool and fragrant; and on the table were several plates of fruit, and some cakes, which his uncle caused to be placed there, so that he might eat some as soon as he arrived, While Samuel was eating some of them John said:

"We are so glad you have come, Samuel. Last winter you could see nothing but snow."

"What became of the snow-man we made last winter?" asked Samuel.

"It froze very hard for more than a week after you left," replied Thomas; "but John and I broke its head a great deal, with snow balls, and afterwards a warm rain fell, and washed it away."

"Is it warm in the city now?" asked John.

"Yes," answered his cousin. "In the middle of the day the pavements seem to be about on fire, and people are afraid to walk far, lest they may be sunstruck. Yesterday two men died with the heat. There seems to be no air stirring from morning till night. Besides, there is much sickness in town, and many persons have left their houses, and gone into the country.

"Father," said Thomas, "how miserable we should be if we had no water to drink this weather, like those poor Arabs that you told us of the other day."

"Yes," answered Mr. Harvey, "the sun must be burning hot in Arabia now."

"How can they live in such a place?" asked John.

"They are not all so miserable as the party I told you of the other day," replied his father. "Besides, you know it is their country, and God has taught them to love it. If an Arab were brought here, he would, probably, think it a most dreary land, except in summer."

"It is very hot only in the middle of the day," replied his cousin, "and then, you know, we are at school. In the afternoons, I sometimes rode out with father, or went on the steamboat. Last week a balloon went up, from the other side of the river. We had a fine view of it from the roof of our house....