The Subspecies of the Mexican Red-bellied Squirrel, Sciurus aureogaster 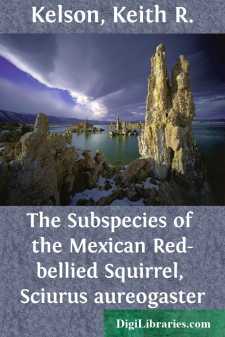 In his excellent taxonomic treatment of the tree squirrels of Mexico and Central America, Nelson (Proc. Washington Acad. Sci., 1:15-110, 2 pls., May 9, 1899) recognized three subspecies of red-bellied squirrels, Sciurus aureogaster aureogaster F. Cuvier, Sciurus aureogaster hypopyrrhus Wagler, and Sciurus aureogaster frumentor Nelson. In his lists of specimens examined, Nelson (op. cit.:42 and 44) assigned certain specimens from "mountains near Santo Domingo" and Guichicovi in Chiapas, and Catemaco in Veracruz, to S. a. aureogaster, and other specimens from the same localities to S. a. hypopyrrhus. I originally attempted to study (identify to subspecies) the series of animals from only three places, but it became evident that a more extensive study was indicated.

The locality whence the holotype of Sciurus aureogaster aureogaster was obtained is unknown. Because certain specimens from Altamira, Tamaulipas, closely resemble Cuvier's figure of the type, Nelson (op. cit.:41) subsequently designated Altamira as the type locality. Miniatitlan, Veracruz, was designated by Nelson as the type locality of S. a. hypopyrrhus because Wagler's description of the type of that subspecies fitted so well certain of Nelson's specimens from that place.

Sciurus a. hypopyrrhus was said by Nelson (op. cit.:43 and 44) to differ from S. a. aureogaster in darker color, thinner pelage, much stiffer and more shining dorsal hairs, slenderer tail with black predominating, larger and proportionately narrower skull with larger auditory bullae, each bulla being "slightly constricted just in front of middle." Sciurus aureogaster varies greatly in intensity of color and in color-pattern. Fully 30 per cent of the specimens examined are in some degree melanistic and approximately 20 per cent of them are completely so. Others are more or less brown; the brown dulls the usually rufous parts. In many specimens this brown is well distributed even in the otherwise grizzled areas; in some specimens it is evenly distributed and in others it is in patches. Indeed, scarcely any two "normally" colored specimens are alike. Typically, the intense rufous color characteristic of the underparts in both S. a. aureogaster and S. a. hypopyrrhus is also present on the costal region and shoulders. Even this distribution of color is highly variable; some specimens (for example No. 23948 KU, from 3 km. E San Andres Tuxtla, Veracruz) show no rufous dorsally and others (for example No. 19307 KU, from 20 km. W Piedras Negras, Veracruz) have the rufous extending over the legs, sides, and almost all of the dorsum from the shoulders to the rump except (in some) for an interrupted median strip of grizzled gray. It is true that specimens from Miniatitlan are darker than those from Altamira, but this seems not to be significant taxonomically, because examination of series from other localities provides no evidence of geographic variation in color except, possibly, in the frequency of melanism. A series of 13 specimens (Univ. Kansas) from 7 and 8 km. WNW Potrero, Veracruz, for example, is quite as dark as topotypes of S. a. hypopyrrhus from Miniatitlan, although the localities of capture are approximately in the center of the geographic range of S. a. aureogaster. In short, there seems to be no way to distinguish S. a. hypopyrrhus from S. a. aureogaster on the basis of color. An unusual amount of variation exists, but it seems to occur at random. Fixing type localities of the two subspecies at the places of origin of certain specimens which in color fit the original descriptions is meaningless because selected specimens or series from almost any place in the geographic range of the species would qualify as approximate color-duplicates of the types.

My findings agree with those of Nelson in that skulls from Miniatitlan average longer and narrower than those from Altamira, but this seems not to be significant taxonomically because the series from Altamira is, to judge from the material I have seen, somewhat shorter and broader cranially than is "average" for the alleged subspecies S....