The Submarine Boys' Lightning Cruise The Young Kings of the Deep 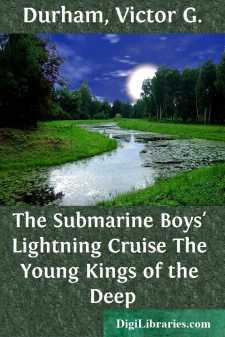 As a matter of fact, the letters, white against the red paint on the door of the shed, meant danger in the most terrible form. It was the sort of danger, which, defied too far, would send one traveling skyward.

The shed stood in a lonely corner of the big Farnum shipbuilding yards at Dunhaven. Now, it was the Farnum yard in which the Pollard submarine boats were built, and this shed contained some two dozen Whitehead submarine torpedoes, each with its fearful load of two hundred pounds of that dread high explosive, guncotton.

It was in the month of February, and the day, at this seacoast point, was cold and blustery, when two boys of seventeen, each in natty blue uniforms and caps resembling those worn by naval officers, crossed the yard toward the shed. Over their uniforms both boys wore heavy, padded blue ulsters, also of naval pattern.

"Danger?" laughed young Captain Jack Benson, stopping before the door and fumbling for the key. "Well, I should say so!"

"Something like two tons and a half of guncotton in this old shed," smiled Hal Hastings. "That's not mentioning some other high explosives."

"It's this gun-cotton that begins to make our calling in life look like a really dangerous one," muttered Jack, as he produced the key and fitted it into the lock.

"Once upon a time," murmured Hal, "we thought there was sufficient danger, just in going out on the ocean in a submarine torpedo craft, and diving below the surface."

"Yet we found that submarine travel wasn't really dangerous," pursued Captain Jack. "Really, riding around in a submarine craft seems as safe, and twice as pleasant, as cruising in any other kind of yacht."

"After we've gotten more used to having hundreds of pounds of gun-cotton on board," smiled Hal, "I don't suppose we'll ever think of the danger in that stuff, either."

Jack unlocked the door, swinging it open. Then both young men passed inside the red shed.

It needed hardly more than a glance, from an observing person, to make certain that neither boy was likely to be much bothered by any ordinary form of danger.

For a number of months, now, Jack Benson and Hal Hastings had lived all but continually aboard submarine torpedo boats. They had operated such craft, when awake, and had dreamed of doing it when asleep. Being youths of intense natures, and unusually quick to learn, they had long before qualified as experts in handling submarine craft.

They had yet, however, one thing to learn practically. It needs the deadly torpedo, fired below the water, and traveling under the surface, to make the torpedo boat the greatest of all dangers that menace the haughty battleship of a modern navy.

Now, at last, Captain Jack Benson, together with his engineer, Hal Hastings, and Eph Somers, another young member of the crew, were about to have their first practical drill with the actual torpedo....