The Submarine Boys and the Middies The Prize Detail at Annapolis 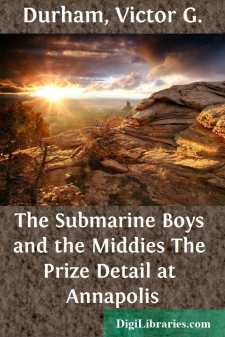 CHAPTER I THE PRIZE DETAIL

The speaker was a boy of sixteen, attired in a uniform much after the pattern commonly worn by yacht captains. The insignia of naval rank were conspicuously absent.

"Now, that I've had the good luck to sell the 'Pollard' to the Navy," responded Jacob Farnum, principal owner of the shipbuilding yard, "I'm not disposed to grumble if the Government prefers to store its property here for a while."

Yet the young shipbuilder—he was a man in his early thirties, who had inherited this shipbuilding business from his father—allowed his eyes to twinkle in a way that suggested there was something else behind his words.

Jack Benson saw that twinkle, but he did not ask questions. If the shipbuilder knew more than he was prepared to tell, it was not for his young captain to ask for information that was not volunteered.

The second boy present, also in uniform, Hal Hastings by name, had not spoken in five minutes. That was like Hal. He was the engineer of the submarine torpedo boat, "Pollard." Jack was captain of the same craft, and could do all the talking.

Jacob Farnum sat back, sideways, at his rolltop desk. On top of the desk lay stacked a voluminous though neat pile of papers, letters, telegrams and memoranda that some rival builders of submarine torpedo boats might have been willing to pay much for the privilege of examining. For, at the present moment, there was fierce competition in the air between rival American builders of submarine fighting craft designed for the United States Navy. Even foreign builders and inventors were clamoring for recognition. Yet just now the reorganized Pollard Submarine Boat Company stood at the top of the line. It had made the last sale to the United States Navy Department.

At this moment, out in the little harbor that was a part of the shipyard, the "Pollard" rode gently at anchor. She was the first submarine torpedo boat built at this yard, after the designs of David Pollard, the inventor, a close personal friend of Jacob Farnum.

Moreover, the second boat, named the "Farnum," had just been launched and put in commission, ready at an hour's notice to take the sea in search of floating enemies of the United States.

"The United States will take its boat one of these days, Captain," Mr. Farnum continued, after lighting a cigar. "By the way, did Dave tell you the name we are thinking of for the third boat, now on the stocks?"

"Dave" was Mr. Pollard, the inventor of the Pollard Submarine boat.

"We have thought," resumed Mr. Farnum, quietly, after blowing out a ring of smoke, "of calling the third boat, now building, the 'Benson.'"

"But—but—naming a boat for the United States Navy after me, sir—"