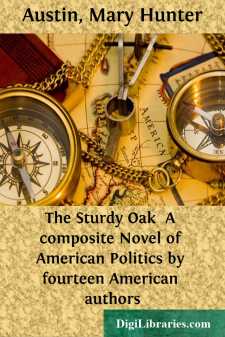 CHAPTER I. BY SAMUEL MERWIN

Genevieve Remington had been called beautiful. She was tall, with brown eyes and a fine spun mass of golden-brown hair. She had a gentle smile, that disclosed white, even teeth. Her voice was not unmusical. She was twenty-three years old and possessed a husband who, though only twenty-six, had already shown such strength of character and such aptitude at the criminal branch of the law that he was now a candidate for the post of district attorney on the regular Republican ticket.

The popular impression was that he would be elected hands down. His address on Alexander Hamilton at the Union League Club banquet at Hamilton City, twenty-five miles from Whitewater (with which smaller city we are concerned in this narrative), had been reprinted in full in the Hamilton City Tribune; and Mrs. Brewster-Smith reported that former Congressman Hancock had compared it, not unfavorably, with certain public utterances of the Honorable Elihu Root.

George Remington was an inch more than six feet tall, with sturdy shoulders, a chin that gave every indication of stubborn strength, a frank smile, and a warm, strong handclasp. He was connected by blood (as well as by marriage) with five of the eight best families in Whitewater. Mr. Martin Jaffry, George's uncle and sole inheritor of the great Jaffry estate (and a bachelor), was known to favor his candidacy; was supposed, indeed, to be a large contributor to the Remington campaign fund. In fact, George Remington was a lucky young man, a coming young man.

George and Genevieve had been married five weeks; this was their first day as master and mistress of the old Remington place on Sheridan Road.

Genevieve, that afternoon, was in the long living-room, trying out various arrangements of the flowers that had been sent in. There were a great many flowers. Most of them came from admirers of George. The Young Men's Republican Club, for one item, had sent eight dozen roses. But Genevieve, still a-thrill with the magic of her five-weeks-long honeymoon, tremulously happy in the cumulative proof that her husband was the noblest, strongest, bravest man alive, felt only joy in his popularity.

As his wife she shared his triumphs. "For better or worse, for richer or poorer, in sickness and health..." the ancient phrases repeated themselves so many times in her softly confused thought, as she moved about among the flowers, that they finally took on a rhythm—

On this day her life was beginning. She had given herself irrevocably into the hands of this man. She would live only in him. Her life would find expression only through his. His strong, trained mind would be her guide, his sturdy courage her strength. He would build for them both, for the twain that were one.

She caught up one red rose, winked the moisture from her eyes, and gazed—rapt, lips parted, color high—out at the close-clipped lawn behind the privet hedge. The afternoon would soon be waning—in another hour or so....