The Student's Companion to Latin Authors 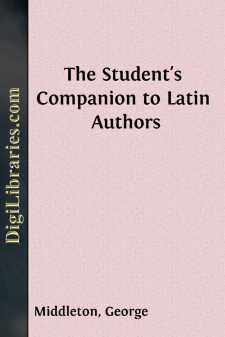 The object of this book is to give in a convenient form all the facts of importance relating to the lives and works of the principal Latin Authors, with full quotation of original authorities on all the chief points. It appears to us that these facts are not at present readily accessible; for the ordinary histories of literature are compelled to sacrifice much exact information to the demand for a critical appreciation of the authors. The latter aspect does not enter into the plan of this book, which may therefore, with advantage, be used side by side with any work of the kind indicated, the two supplementing one another. The authors have been, as far as possible, illustrated from their own works. Special attention has been paid to the great writers, as the book is meant for use in the upper forms of schools and by students at the Universities. We had collected a considerable amount of matter upon the minor authors, most of which it was thought advisable to omit, so as not to extend the book unduly. An attempt, however, has been made to retain the most important facts about these, whenever they illustrated one of the great authors, or whenever it was thought that they ought to be in the hands of a student. We have attempted no treatment of early Latin as seen in inscriptions and the like, but have started with the first literary author, Livius Andronicus, and have gone down to Tacitus and the younger Pliny, dealing with each author by himself. A section has been added on Suetonius. A sketch of the chief ancient authorities on Roman writers is given at the end of the book, as well as a selected list of editions, which, without being exhaustive, will, we hope, be of service to the average student.

Apart from our own study of the authors, our principal authority has, of course, been the History of Roman Literature by Teuffel and Schwabe (translated by Prof. G. C. W. Warr), and we have made an extensive use of editions and monographs both English and foreign, which are mentioned where necessary. Ennius has been quoted from Vahlen’s edition, Plautus from the new edition of Ritschl, the fragments of the tragedians and comedians from Ribbeck, of Lucilius from L. Müller, and of the minor poets from Bährens, the minor historians from Peter’s Fragmenta, and Suetonius’ fragmentary works from Reifferscheid.

Some of our materials were originally prepared for the Humanity classes in Aberdeen University, and the Latin Literary Club in connexion with the Honours class. We have to thank some of our pupils for help and criticism, particularly Mr. A. Souter, of Gonville and Caius College, Cambridge, and Mr. A. G. Wright, of St. John’s College, Cambridge, the latter of whom prepared the materials for the article on Tibullus, and gave us some useful suggestions. We are specially indebted to Professor W. M. Ramsay, without whom the book would not have been written. Professor Ramsay has read nearly the whole of the work as it has passed through the press, and has all along given us invaluable assistance and advice....