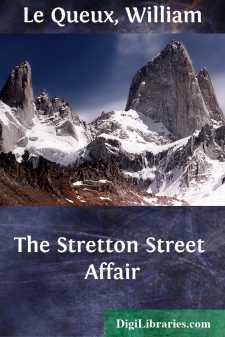 The whole circumstances of the Stretton Street Affair were so complicated and so amazing from start to finish that, had the facts been related to me, I confess I should never have for a moment given them credence.

That they were hard, undeniable facts, presenting a problem both startling and sensational, the reader will quickly learn from this straightforward narrative—an open confession of what actually occurred.

In all innocence, and certainly without any desire to achieve that ephemeral notoriety which accrues from having one’s portrait in the pictorial press and being besieged by interviewers in search of a “story,” I found myself, without seeking adventure, one of the chief actors in a drama which was perhaps one of the strangest and most astounding of this our twentieth century.

I almost hesitate to set down the true facts, so utterly amazing are they. Indeed, as I sit in the silence of this old brown room in a low-built and timbered Surrey farmhouse, with pen and paper before me, I feel that it is only by a miracle that I have been spared to narrate one of the most complex and ingenious plots which the human mind, with malice aforethought, ever conceived.

I ought, I suppose, in opening to tell you something concerning myself. Hugh Garfield is my name; my age twenty-nine, and I am the son of the late Reverend Francis Garfield, rector of Aldingbourne and minor canon of Chichester. In the war I served with the Royal Air Force and obtained my pilot’s certificate. I went to France and afterwards to Italy, and on being demobilized returned to my work as an electrical engineer in the employ of Messrs. Francis and Goldsmith, the well-known firm whose palatial offices are in Great George Street, Westminster, quite close to the Institute of Electrical Engineers.

Though I had obtained my Degree in Science I was at the time employed a good deal upon clerical work. Five years of war had, of course, been something of a set-back to my career, but in our reputable firm our places had been kept open for us—for those who returned, and we were, alas! only three out of twenty-eight.

Perhaps it was that having done my duty and obtained my captaincy and a Military Cross, the loyal, old-fashioned firm regarded me with considerable favour. At any rate, it set its face against anything German, even in the post-war days when the enemy sent its Ambassador to the Court of St. James, and we weakheartedly reopened trade with the diabolical Huns and allowed them to dump in their cheap and nasty goods just as though no war had happened.

Messrs. Francis and Goldsmith was a private firm, and the principals were both fine, patriotic Britons. Though electrical appliances were coming from Germany wholesale, and being put in to the market at prices with which British firms could never hope to compete, yet they stuck to their old resolution when in 1918 they had joined the Anti-German Union of “No German Goods.”

Would that all other firms, electrical and otherwise, had done likewise...!