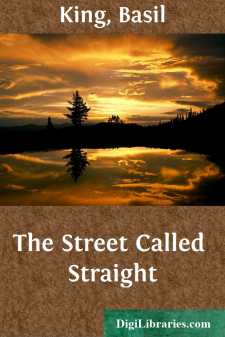 THE STREET CALLED STRAIGHT I

s a matter of fact, Davenant was under no illusions concerning the quality of the welcome his hostess was according him, though he found a certain pleasure in being once more in her company. It was not a keen pleasure, but neither was it an embarrassing one; it was exactly what he supposed it would be in case they ever met again—a blending on his part of curiosity, admiration, and reminiscent suffering out of which time and experience had taken the sting. He retained the memory of a minute of intense astonishment once upon a time, followed by some weeks, some months perhaps, of angry humiliation; but the years between twenty-four and thirty-three are long and varied, generating in healthy natures plenty of saving common sense. Work, travel, and a widened knowledge of men and manners had so ripened Davenant's mind that he was able to see his proposal now as Miss Guion must have seen it then, as something so incongruous and absurd as not only to need no consideration, but to call for no reply. Nevertheless, it was the refusal on her part of a reply, of the mere laconic No which was all that, in his heart of hearts, he had ever expected, that rankled in him longest; but even that mortification had passed, as far as he knew, into the limbo of extinct regrets. For her present superb air of having no recollection of his blunder he had nothing but commendation. It was as becoming to the spirited grace of its wearer as a royal mantle to a queen. Carrying it as she did, with an easy, preoccupied affability that enabled her to look round him and over him and through him, to greet him and converse with him, without seeming positively to take in the fact of his existence, he was permitted to suppose the incident of their previous acquaintance, once so vital to himself, to have been forgotten. If this were so, it would be nothing very strange, since a woman of twenty-seven, who has had much social experience, may be permitted to lose sight of the more negligible of the conquests she has made as a girl of eighteen. She had asked him to dinner, and placed him honorably at her right; but words could not have made it plainer than it was that he was but an accident to the occasion.

He was there, in short, because he was staying with Mr. and Mrs. Temple. After a two years' absence from New England he had arrived in Waverton that day, "Oh, bother! bring him along," had been the formula in which Miss Guion had conveyed his invitation, the dinner being but an informal, neighborly affair. Two or three wedding gifts having arrived from various quarters of the world, it was natural that Miss Guion should want to show them confidentially to her dear friend and distant relative, Drusilla Fane. Mrs. Fane had every right to this privileged inspection, since she had not only timed her yearly visit to her parents, Mr. and Mrs. Temple, so that it should synchronize with the wedding, but had introduced Olivia to Colonel Ashley, in the first place. Indeed, there had been a rumor at Southsea, right up to the time of Miss Guion's visit to the pretty little house on the Marine Parade, that the colonel's calls and attentions there had been not unconnected with Mrs....