The Strange Adventures of Mr. Middleton 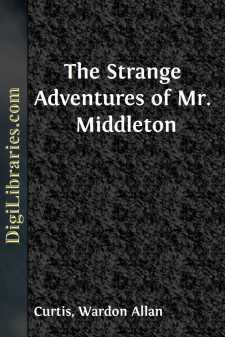 The Manner in Which Mr. Edward Middleton Encounters the Emir Achmed Ben Daoud.

It was a lowering and gloomy night in the early part of the present century. Mr. Edward Middleton, a gallant youth, who had but lately passed his twenty-third year, was faring northward along the southern part of that famous avenue of commerce, Clark Street, in the city of Chicago, wending his way toward the emporium of Mr. Marks Cohen. Suddenly the rain which the cloudy heaven had been promising for many hours, began to descend in great scattered drops that presaged a heavy shower. Mr. Middleton hastened his steps. It was possible that if the dress-suit he wore, hired for the occasion of the wedding of his friend, Mr. Chauncey Stackelberg, should become imbued with moisture in the shower that now seemed imminent, Mr. Cohen, of whom he had hired the suit, would not add to the modicum agreed upon, a charge for pressing it. But if his own suit for everyday wear, which he was carrying under his arm with the purpose of putting it on at good Mr. Cohen’s establishment, should become wet, that would be a serious matter. It was, in fact, his only suit and that will explain the anxiety with which he scanned the heavens. Suddenly, Pluvius unloosed all the fountains of the sky, and with scarcely a thought whither he was going, Mr. Middleton darted into the first haven of refuge, a little shop he happened to be just passing. As the door closed behind him with the tinkle of a bell in some remote recess, for the first time he realized that the place he had entered was utterly dark. His ears, straining to their uttermost to make compensation for the inability of his eyes to be of service to him in this juncture, could no more than inform him that the place was utterly silent. But to his nose came the powerful fragrance of strange foreign aromas such as he had never had experience of before,—which, heavy and oppressive in their cloying perfume, seemed the very breath of mystery. All traffic had ceased without, as the night was well advanced and the rain beat so heavily that the few whom business or pleasure had called abroad at that hour, had sought shelter. But though the rain now fell with a steady roar, Mr. Middleton, perturbed by a nameless disquiet, was about to rush forth into the tempest and seek other shelter, when a door burst open and, outlined against a glare of light, stood a gigantic man who said in a deep, low voice that seemed to pervade every corner of the room and cause the air to shake in slow vibrations, “Salaam aleikoom!” Which being repeated again, Mr. Middleton replied:

“I do not understand the German language.”

A low, musical laugh greeted this remark and the laugh resolving itself into a low, musical voice that bade him enter, Mr. Middleton found himself in a small boudoir of oriental magnificence, facing a young man in the costume of the Moslem nations, who sat cross-legged upon a divan smoking a narghileh. He was of perhaps twenty-six, somewhat slight, but elegant of person. His face, extremely handsome, betokened that he was a man of intelligence and sensibility....