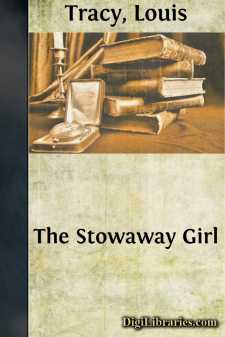 CHAPTER I THE "ANDROMEDA"

"Marry Mr. Bulmer! That horrid old man! Uncle, what are you saying?"

The girl sprang to her feet as if she were some timid creature of the wild aroused from sylvan broodings by knowledge of imminent danger. In her terror, she upset the three wineglasses that formed part of the display beside each couvert on the luncheon table. One, rose-tinted and ornate, crashed to the floor, and the noise seemed to irritate the owner of Linden House more than his niece's shrill terror.

"No need to bust up our best set of 'ock glasses just because I 'appen to mention owd Dickey Bulmer," he growled.

The color startled so suddenly out of the girl's face began to return. Her eyes lost their dilation of fear. Somehow, the comment on the broken glass seemed to deprive "owd Dickey Bulmer's" personality of its real menace.

"I'm sorry," she said, and stooped to pick up the fragments scattered over the carpet.

"Leave that alone," came the sharp order. "So long as I've the brass to pay for 'em, there's plenty more where that kem from, an' in any case, it's the 'ousemaid's job. Leave it alone, I tell you! An' sit down. It's 'igh time you an' me 'ad a straight talk, an' I can't do wi' folk bouncin' about like an injia-rubber ball when I've got things to say to 'em."

He stretched a fat hand toward a mahogany cigar-box, affected to choose a cigar with deliberative crackling, hacked at the selection with a fruit knife, and dropped the severed end into an unused finger-bowl; then he struck a match, and puffed furiously until a rim of white ash tipped the brown. This achieved, he helped himself to the port. Though he carefully avoided glancing at his companion, he knew quite well that she had drawn a chair to the opposite end of the table, and was looking at him intently; her chin was propped on her clenched hands; the skin on her white forehead was puckered into nervous lines; her lips, pressed close, had lost their Cupid's bow that seemed ever ready to bend into a smile. Meanwhile, the man who had caused these signs of distress gulped down some of the wine, held the glass up to the light as a tribute to the excellence of its contents, darted his tongue several times in and out between his teeth, smacked his lips, replaced the cigar in his mouth, and leaned back in his chair until it creaked.

Iris Yorke was accustomed to this ritual; she gave it the unobservant tolerance good breeding extends to the commonplace. But to-day, for the first time during the two years that had sped so happily since she came back to Linden House from a Brussels pension, she found herself, even in her present trouble, wondering how it was possible that David Verity could be her mother's brother. This coarse-mannered hog of a man, brother to the sweet-voiced, tender-hearted gentlewoman whose gracious wraith was left undimmed in the girl's memory by the lapse of years—it would be unbelievable if it were not true! He was so gross, so tubby, so manifestly over-fed, whereas her mother had ever been elegant and bien soignée....