The Story of Wool 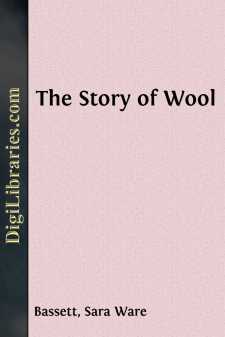 Donald Clark glanced up from his Latin grammar and watched his father as he tore open the envelope of a telegram and ran his eye over its contents. Evidently the message was puzzling. Again Mr. Clark read it. Donald wondered what it could be. All the afternoon the yellow envelope had been on the table, and more than once his mind had wandered from the lessons he was preparing to speculate on the possible tidings wrapped up in that sealed packet. Not that a telegram was an unheard-of event in the family. No, his father received many; most of them, however, went to the Boston office, and the boy could not imagine what this one was doing at their Cambridge home.

The moment his father entered the house Donald handed him the envelope and Mr. Clark quickly stripped it open; yet even though it now lay spread out before him the mystery it contained appeared to be unsolved. It was seldom that Donald asked questions, nevertheless he found himself wondering and wondering what it was that had brought that odd little wrinkle into his father's forehead. Donald understood that wrinkle; he had seen it many times and knew it never came unless some question arose to which it was difficult to frame an answer. As his father and he had lived alone together ever since he could remember they had grown to know each other very well, and had become the best of friends. It therefore followed that when one worried, both worried.

As the boy looked on, his father glanced up suddenly and caught sight of the anxiety mirrored in his face. The man smiled kindly.

"I can find no answer to this riddle, Don," he said. "Listen! Perhaps you can help me. A few days ago I received word from Crescent Ranch that Johnson, our manager, had been thrown from his horse while out on the range and so badly hurt that he will never again be able to continue his work with us. They have taken him to the hospital at Glen City. The letter came from Tom Thornton, the head herder at the ranch. Thornton assured me that everything was going well, and that there was not the slightest need for me to come to Idaho."

"Well, to-day I received this telegram. It is neither from Johnson nor Thornton. It reads:

"'You would do well to visit Crescent Ranch,' and it is signed—'Sandy McCulloch.'"

"Who is Sandy McCulloch?" asked Donald.

"That's the puzzle! I do not know. I never heard of any such person in my life—not that I remember. Evidently, though, he knows enough about me to know that I own that sheep ranch, and to think that I ought to go out there and see it. I do not understand it at all. What do you make of it, son?"

"Do you suppose anything is wrong on the ranch?"

"No, indeed! Thornton wrote particularly that everything was all right. He was Johnson's assistant, and he ought to know. Besides, he has been with us a long time, and is thoroughly familiar with every part of the work."

"Maybe it's a joke," ventured Donald.

"It would be a stupid sort of joke to get me from Boston to Idaho on a wild-goose chase. No, there is no joke about this," went on Mr. Clark, rising and pacing the floor. "Sandy McCulloch is real, and he has some real reason for wanting me to go to Crescent Ranch. I think I shall take his advice and go."

"Uncle Harold will have to do double duty while I am gone."