The Story of Wellesley 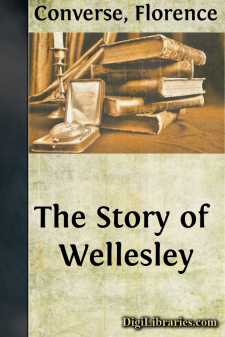 CHAPTER I THE FOUNDER AND HIS IDEALS I.

As the nineteenth century recedes into history and the essentially romantic quality of its great adventures is confirmed by the "beauty touched with strangeness" which illumines their true perspective, we are discovering, what the adventurers themselves always knew, that the movement for the higher education of women was not the least romantic of those Victorian quests and stirrings, and that its relation to the greatest adventure of all, Democracy, was peculiarly vital and close.

We know that the "man in the street", in the sixties and seventies, watching with perplexity and scornful amusement the endeavor of his sisters and his daughters—or more probably other men's daughters—to prove that the intellectual heritage must be a common heritage if Democracy was to be a working theory, missed the beauty of the picture. He saw the slim beginning of a procession of young women, whose obstinate, dreaming eyes beheld the visions hitherto relegated by scriptural prerogative and masculine commentary to their brothers; inevitably his outraged conservatism missed the beauty; and the strangeness he called queer. That he should have missed the democratic significance of the movement is less to his credit. But he did miss it, fifty years ago and for several years thereafter, even as he is still missing the democratic significance of other movements to-day. Processions still pass him by,—for peace, for universal suffrage, May Day, Labor Day, and those black days when the nations mobilize for war, they pass him by,—and the last thing he seems to discover about them is their democratic significance. But after a long while the meaning of it all has begun to penetrate. To-day, his daughters go to college as a matter of course, and he has forgotten that he ever grudged them the opportunity.

They remind him of it, sometimes, with filial indirection, by celebrating the benevolence, the intellectual acumen, the idealism of the few men, exceptional in their day, who saw eye to eye with Mary Lyon and her kind; the men who welcomed women to Oberlin and Michigan, who founded Vassar and Wellesley and Bryn Mawr, and so helped to organize the procession. Their reminders are even beginning to take form as records of achievement; annals very far from meager, for achievement piles up faster since Democracy set the gate of opportunity on the crack, and we pack more into a half century than we used to. And women, more obviously than men, perhaps, have "speeded up" in response to the democratic stimulus; their accomplishment along social, political, industrial, and above all, educational lines, since the first woman's college was founded, is not inconsiderable.

How much, or how little, would have been accomplished, industrially, socially, and politically, without that first woman's college, we shall never know, but the alumnae registers, with their statistics concerning the occupations of graduates, are suggestive reading. How little would have been accomplished educationally for women, it is not so difficult to imagine: Vassar, Wellesley, Smith, Mt....