The Story of the White Mouse 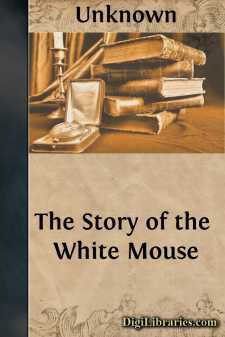 In the kingdom of Bonbobbin, which, by the Chinese annals, appears to have flourished twenty thousand years ago, there reigned a prince, endowed with every accomplishment which generally distinguishes the sons of kings. His beauty was brighter than the sun. The sun, to which he was nearly related, would sometimes stop his course, in order to look down and admire him.

His mind was not less perfect than his body; he knew all things without having ever read; philosophers, poets, and historians, submitted their works to his decision; and so penetrating was he, that he could tell the merit of a book by looking on the cover. He made epic poems, tragedies, and pastorals, with surprising facility; song, epigram, or rebus, was all one to him; though, it is observed, he could never finish an acrostick. In short, the fairy who presided at his birth had endowed him with almost every perfection; or, what was just the same, his subjects were ready to acknowledge he possessed them all; and, for his own part, he knew nothing to the contrary. A prince so accomplished, received a name suitable to his merit; and he was called Bonbenin-bonbobbin-bonbobbinet, which signifies Enlightener of the Sun.

As he was very powerful, and yet unmarried, all the neighbouring kings earnestly sought his alliance. Each sent his daughter, dressed out in the most magnificent manner, and with the most sumptuous retinue imaginable, in order to allure the prince; so that, at one time, there were seen at his court, not less than seven hundred foreign princesses, of exquisite sentiment and beauty, each alone sufficient to make seven hundred ordinary men happy.

Distracted in such a variety, the generous Bonbenin, had he not been obliged by the laws of the empire to make choice of one, would very willingly have married them all, for none understood gallantry better. He spent numberless hours of solicitude, in endeavouring to determine whom he should choose. One lady was possessed of every perfection, but he disliked her eye-brows; another was brighter than the morning-star, but he disapproved her fong-whang; a third did not lay enough of white on her cheek; and a fourth did not sufficiently blacken her nails. At last, after numberless disappointments on the one side and the other, he made choice of the incomparable Nanhoa, queen of the Scarlet Dragons.

The preparations for the royal nuptials, or the envy of the disappointed ladies, needs no description; both the one and the other were as great as they could be. The beautiful princess was conducted, amidst admiring multitudes, to the royal couch, where, after being divested of every encumbering ornament, he came more chearful than the morning; and printing on her lips a burning kiss, the attendants took this as a proper signal to withdraw.

Perhaps I ought to have mentioned in the beginning, that, among several other qualifications, the prince was fond of collecting and breeding mice, which being an harmless pastime, none of his counsellors thought proper to dissuade him from; he therefore kept a great variety of these pretty little animals in the most beautiful cages, enriched with diamonds, rubies, emeralds, pearls, and other precious stones. Thus he innocently spent four hours each day in contemplating their innocent little pastimes.

But, to proceed, the prince and princess now retired to repose; and though night and secrecy had drawn the curtain, yet delicacy retarded those enjoyments which passion presented to their view....