The Story of the Upper Canadian Rebellion, Volume 1 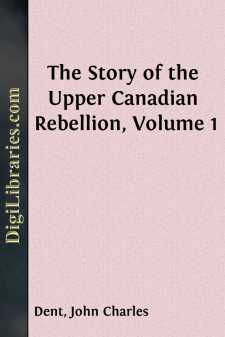 I n the afternoon of a warm and sultry day, towards the close of one of the warmest and most sultry summers which Upper Canada has ever known, an extraordinary trial took place at the court-house in the old town of Niagara. The time was more than threescore years ago, when York was a place of insignificant proportions; when Hamilton could barely be said to have an existence; and when the sites of most of the other towns of the Province whose names are now familiar to us still formed part of the hunting-grounds of the native Indian. The little town on the frontier was relatively a place of much greater importance than it is at present; though its fortunes, even at that early period, were decidedly on the wane, and such glory as it could ever boast of possessing, as the Provincial capital, had departed from it long before. To speak with absolute precision, the date was Friday, the 20th of August, 1819: so long ago that, as far as I have been able to learn, there are only two persons now living who were present on the occasion. The court-room, which was the largest in the Province, was packed to the doors, and though every window was thrown open for purposes of ventilation, the atmosphere was almost stifling. Even a stranger, had any such been present, could not have failed to perceive that the trial was one in which a keen interest was felt by the spectators, many of whom were restless and irritable, insomuch that they found it impossible to keep perfectly still, and from time to time shifted uneasily in their places. Whispers, "not loud, but deep," occasionally reverberated from the back benches to the quadrangular space in front assigned to gentlemen of the long robe, and ascended thence to the august presence upon the judgment seat. Ever and anon the stentorian voice of the crier proclaimed silence, in a tone which plainly signified that endurance had well-nigh reached its limits, and that he would really be compelled to proceed to extremities if his mandate were any longer disobeyed.

The court-room was of the old conventional pattern. At the upper end was the large elevated desk, or throne, extending nearly half way across the chamber, with spacious cushioned chairs, and other suitable accommodation for the presiding judge and his associates. To right and left were the enclosed jury boxes, with seats raised considerably above the level of the floor, but not so high as those provided for the justices. Directly opposite the throne of justice, and about six yards distant therefrom, was the prisoners' dock, into which five or six persons might have been thrust, at a pinch. The intervening space enclosed by this quadrangle—throne, prisoners' dock, and jury boxes—was mainly appropriated to the use of barristers and attorneys, and their clients. A large portion of the space so appropriated was occupied by a table, around which were distributed a few chairs, every one of which was occupied; and at the end directly below the judicial throne was a small enclosure provided for the clerk of the court, set apart by a low railing, and containing a desk of diminutive size....