The Story of the Three Goblins 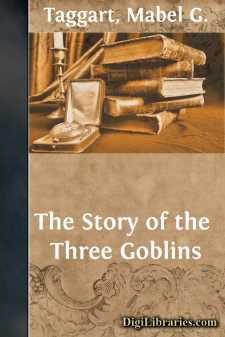 THE STORY OF THE THREE GOBLINS.

Once upon a time there were three little goblins.

Their names were Red-Cap, Blue-Cap and Yellow-Cap, and they lived in a mountain.

The goblins had a great friend—a green frog whose name was Rowley.

Rowley came every year to see the little goblins, and told them stories about the Big World where he lived.

The goblins had never seen the Big World, and often asked their father to let them go with Rowley, but he always said, “Not yet, my sons.”

The name of the goblins' father was Old Black-Cap.

He was King of the Mountain.

At last, one day Old Black-Cap called the three goblins and said to them: “I am going to send you into the Big World to look for something which the fairies stole from me a long time ago. A Red Feather which always belongs to the King of the Mountain. Go, my sons, and the one who finds it shall be king of this mountain after me.”

Red-Cap, Blue-Cap and Yellow-Cap said good-bye to their father and climbed out into the Big World through a rabbit hole. When they had gone a little way they saw something lying on the ground. Something large and white and round.

“What is that?” they all cried together.

Red-Cap, who was the eldest, got inside it to see what it was made of.

Now little Red-Cap was a brave goblin, but he was rather frightened when the White Thing began to roll so fast. He wondered if it would ever stop, when—Bump! Splash!—he found he was in the water, and something big with a smooth coat was close beside him. It was a kind water-rat who had seen the poor little goblin roll into the water.

“I can swim,” said Mr. Rat. “I will hold you by the collar and take you to dry land again.”

Red-Cap thanked the kind water-rat very much, and they sat down on the bank of the stream to rest. Red-Cap told the rat all about his father and brothers and the Red Feather, and soon Blue-Cap and Yellow-Cap came running up, quite out of breath, but very glad to find their brother quite safe and not even scratched.

They all soon said good-bye to the rat, who wished them good luck, showed them the road and told them to look in a tree—which he pointed out—where he said they would find something which would help them very much.

The goblins raced to the tree. Yellow-Cap won the race and climbed up quickly, while the others ran all round looking to see what they could find.

They found nothing, and Yellow-Cap was just coming down again when he spied a bird's-nest with three dear little blue eggs in it. He crawled along the branch to look at the eggs, and saw something white under the nest. Yellow-Cap pulled it gently, and out came an envelope. Full of joy he slipped down to his brothers.

They opened the envelope and found a sheet of paper on which was written in gold letters,—

“You who seek the Feather RedFirst the Serpent's blood must shed;In the cave where fairies dwellThe Feather lies, so search it well.”

Soon they came to a big dark forest, and after they had gone a little way they saw a fence and a large board on which was written in red letters,—

The goblins looked over the fence and saw that the ground was covered with gold and silver!