The Story of the Soil; from the Basis of Absolute Science and Real Life, 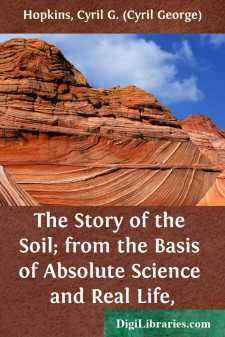 PERCY took a lesson in turning the cream separator and after dinner Mrs. Thornton assured him that she and her sister were greatly disappointed that they had not been permitted to hear the discussion concerning the use of science on the farm.

"We have never forsaken our belief that these old farms can again be made to yield bountiful crops," she said, "as ours did for so many years under the management of our ancestors. 'Hope springs eternal in the human breast.' I stop with that for I do not like the rest of the couplet. We can see that some marked progress has been made under my husband's management, although he feels that it is very slow work building up a run-down farm. But he has raised some fine crops on the fields under cultivation,—as much as ten barrels of corn to the acre, have you not, Dear?" she asked.

"Yes, fully that much, but even ten barrels per acre on one small field is nothing compared to the great fields of corn Mr. Johnston raises in the West. and it makes a mighty small show here on a nine-hundred-acre farm, most of which hasn't been cropped for more than twenty years; and even then it was given up because the negro tenants couldn't raise corn enough to live on.

"I've talked some with the fertilizer agents, but they don't know much about fertilizers, except what they read in the testimonials published in the advertising booklets. I have had some good help from the agricultural papers, but most that is written for the papers doesn't apply to our farm, and it's so indefinite and incomplete, that I've just spent this whole evening asking Mr. Johnston questions; and I haven't given him a chance to answer them all yet."

"I am sure you have not asked more questions this afternoon than I did this forenoon," Percy remarked; "and all your answers were based on authentic history or actual experience, while my answers were only what I have learned from others."

"Well, if we were more ready to learn from others, it would be better for all of us," said Mr. Thornton. "Experience is a mighty dear teacher and, even if we finally learn the lesson, it may be too everlasting late for us to apply it. Now we all want to learn about that process called nitrification."

"It is an extremely interesting and important process," said Percy. "It includes the stages or steps by which the insoluble organic nitrogen of the soil is converted into soluble nitrate nitrogen, in which form it become available as food for all of our agricultural plants."

"Excepting none," Percy replied. "The legume plants, like clover, take nitrogen from the soil so far as they can secure it in available form, and in this respect clover is not different from corn. The respect in which it is different is the power of clover to secure additional supplies of nitrogen from the air when the soil's available supply becomes inadequate to meet the needs of the growing clover. If the conditions are suitable for nitrogen-fixation, then the growth of the legume plants need not be limited by lack of nitrogen; whereas, nitrogen is probably the element that first limits the growth and yield of all other crops on your common soils."

"Now, what do you think of that, Girls? With millions of dollars' worth of nitrogen in the air over every acre, our crops are poor just because we don't use it....