The Story of the Other Wise Man 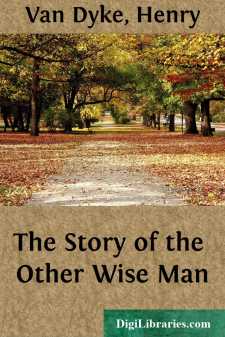 Who seeks for heaven alone to save his soul,May keep the path, but will not reach the goal;While he who walks in love may wander far,Yet God will bring him where the blessed are.

OU know the story of the Three Wise Men of the East, and how they traveled from far away to offer their gifts at the manger-cradle in Bethlehem. But have you ever heard the story of the Other Wise Man, who also saw the star in its rising, and set out to follow it, yet did not arrive with his brethren in the presence of the young child Jesus? Of the great desire of this fourth pilgrim, and how it was denied, yet accomplished in the denial; of his many wanderings and the probations of his soul; of the long way of his seeking, and the strange way of his finding, the One whom he sought—I would tell the tale as I have heard fragments of it in the Hall of Dreams, in the palace of the Heart of Man.

N the days when Augustus Caesar was master of many kings and Herod reigned in Jerusalem, there lived in the city of Ecbatana, among the mountains of Persia, a certain man named Artaban, the Median. His house stood close to the outermost of the seven walls which encircled the royal treasury. From his roof he could look over the rising battlements of black and white and crimson and blue and red and silver and gold, to the hill where the summer palace of the Parthian emperors glittered like a jewel in a sevenfold crown.Around the dwelling of Artaban spread a fair garden, a tangle of flowers and fruit trees, watered by a score of streams descending from the slopes of Mount Orontes, and made musical by innumerable birds. But all color was lost in the soft and odorous darkness of the late September night, and all sounds were hushed in the deep charm of its silence, save the plashing of the water, like a voice half sobbing and half laughing under the shadows. High above the trees a dim glow of light shone through the curtained arches of the upper chamber, where the master of the house was holding council with his friends.He stood by the doorway to greet his guests—a tall, dark man of about forty years, with brilliant eyes set near together under his broad brow, and firm lines graven around his fine, thin lips; the brow of a dreamer and the mouth of soldier, a man of sensitive feeling but inflexible will—one of those who, in whatever age they may live, are born for inward conflict and a life of quest.His robe was of pure white wool, thrown over a tunic of silk; and a white, pointed cap, with long lapels at the sides, rested on his flowing black hair. It was the dress of the ancient priesthood of the Magi, called the fire-worshippers."Welcome!" he said, in his low, pleasant voice, as one after another entered the room—"welcome, Abdus; peace be with you, Rhodaspes and Tigranes, and with you my father, Abgarus. You are all welcome, and this house grows bright with the joy of your presence."There were nine of the men, differing widely in age, but alike in the richness of their dress of many-colored silks, and in the massive golden collars around their necks, marking them as Parthian nobles, and in the winged circles of gold resting upon their breasts, the sign of the followers of Zoroaster....