The Story of the Odyssey 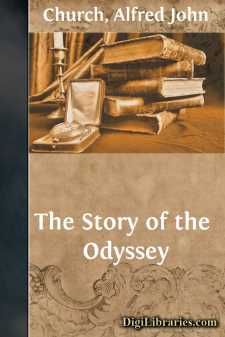 Three thousand years ago the world was still young. The western continent was a huge wilderness, and the greater part of Europe was inhabited by savage and wandering tribes. Only a few nations at the eastern end of the Mediterranean and in the neighbouring parts of Asia had learned to dwell in cities, to use a written language, to make laws for themselves, and to live in a more orderly fashion. Of these nations the most brilliant was that of the Greeks, who were destined in war, in learning, in government, and in the arts, to play a great part in the world, and to be the real founders of our modern civilization. While they were still a rude people, they had noble ideals of beauty and bravery, of duty and justice. Even before they had a written language, their singers had made songs about their heroes and their great deeds; and later these songs, which fathers had taught to children, and these children to their children, were brought together into two long and wonderful poems, which have ever since been the delight of the world, the Iliad and the Odyssey.

The Iliad is the story of the siege of Ilium, or Troy, on the western coast of Asia Minor. Paris, son of the king of Troy, had enticed Helen, the most beautiful of Grecian women, and the wife of a Grecian king, to leave her husband's home with him; and the kings and princes of the Greeks had gathered an army and a fleet and sailed across the Aegean Sea to rescue her. For ten years they strove to capture the city. According to the fine old legends, the gods themselves took a part in the war, some siding with the Greeks, and some with the Trojans. It was finally through Ulysses, a famous Greek warrior, brave and fierce as well as wise and crafty, that the Greeks captured the city.

The second poem, the Odyssey, tells what befell Ulysses, or Odysseus, as the Greeks called him, on his homeward way. Sailing from Troy with his little fleet of ships, which were so small that they used oars as well as sails, he was destined to wander for ten years longer before he could return to his rocky island of Ithaca, on the west shore of Greece, and to his faithful wife, Penelope.

He had marvellous adventures, for the gods who had opposed the Greeks at Troy had plotted to bring him ill-fortune. Just as his ships were safely rounding the southern cape of Greece, a fierce storm took them out of their course, and bore them to many strange lands—lands of giants, man-eating monsters, and wondrous enchantments of which you will delight to read. Through countless perils the resolute wanderer forced his way, losing ship after ship from his little fleet, and companion after companion from his own band, until he reached home friendless and alone, and found his palace, his property, and his family all in the power of a band of greedy princes. These he overcame by his cunning and his strength, and his long trials were ended.

As you read these ancient tales, you must forget what knowledge you have of the world, and think of it as the Greeks did....