The Story of the Mind 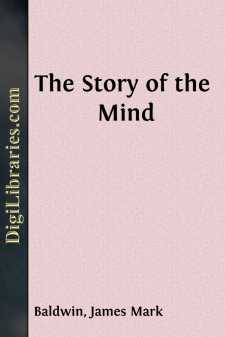 In this little book I have endeavoured to maintain the simplicity which is the ideal of this series. It is more difficult, however, to be simple in a topic which, even in its illustrations, demands of the reader more or less facility in the exploration of his own mind. I am persuaded that the attempt to make the matter of psychology more elementary than is here done, would only result in making it untrue and so in defeating its own object.

In preparing the book I have secured the right and welcomed the opportunity to include certain more popular passages from earlier books and articles. It is necessary to say this, for some people are loath to see a man repeat himself. When one has once said a thing, however, about as well as he can say it, there is no good reason that he should be forced into the pretence of saying something different simply to avoid using the same form of words a second time. The question, of course, is as to whether he should not then resign himself to keeping still, and letting others do the further speaking. There is much to be said for such a course. But if one have the right to print more severe and difficult things, and think he really has something to say which would instruct the larger audience, it would seem only fair to allow him to speak in the simpler way also, even though all that he says may not have the merit of escaping the charge of infringing his own copyrights!

I am indebted to the proprietors of the following magazines for the use of such passages: The Popular Science Monthly, The Century Magazine, The Inland Educator; and with them I also wish to thank The Macmillan Company and the owners of Appletons' Universal Cyclopædia.

As to the scope and contents of the Story, I have aimed to include enough statement of methods and results in each of the great departments of psychological research to give the reader an intelligent idea of what is being done, and to whet his appetite for more detailed information. In the choice of materials I have relied frankly on my own experience and in debatable matters given my own opinions. This gives greater reality to the several topics, besides making it possible, by this general statement, at once to acknowledge it, and also to avoid discussion and citation of authorities in the text. At the same time, in the exposition of general principles I have endeavoured to keep well within the accepted truth and terminology of psychology.

It will be remarked that in several passages the evolution theory is adopted in its application to the mind. While this great theory can not be discussed in these pages, yet I may say that, in my opinion, the evidence in favour of it is about the same, and about as strong, as in biology, where it is now made a presupposition of scientific explanation. So far from being unwelcome, I find it in psychology no less than in biology a great gain, both from the point of view of scientific knowledge and from that of philosophical theory. Every great law that is added to our store adds also to our conviction that the universe is run through with Mind....