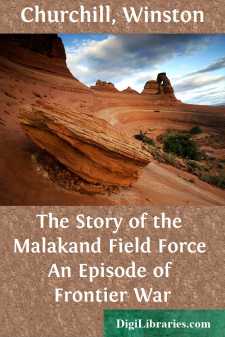 CHAPTER I: THE THEATRE OF WAR The Ghilzaie chief wrote answer: "Our paths are narrow andsteep.The sun burns fierce in the valleys, and the snow-fed streams rundeep;. . . . . . . . . .So a stranger needs safe escort, and the oath of a valiant friend.""The Amir's Message," SIR A. LYALL.

All along the north and north-west frontiers of India lie the Himalayas, the greatest disturbance of the earth's surface that the convulsions of chaotic periods have produced. Nearly four hundred miles in breadth and more than sixteen hundred in length, this mountainous region divides the great plains of the south from those of Central Asia, and parts as a channel separates opposing shores, the Eastern Empire of Great Britain from that of Russia. The western end of this tumult of ground is formed by the peaks of the Hindu Kush, to the south of which is the scene of the story these pages contain. The Himalayas are not a line, but a great country of mountains. By one who stands on some lofty pass or commanding point in Dir, Swat or Bajaur, range after range is seen as the long surges of an Atlantic swell, and in the distance some glittering snow peak suggests a white-crested roller, higher than the rest. The drenching rains which fall each year have washed the soil from the sides of the hills until they have become strangely grooved by numberless water-courses, and the black primeval rock is everywhere exposed. The silt and sediment have filled the valleys which lie between, and made their surface sandy, level and broad. Again the rain has cut wide, deep and constantly-changing channels through this soft deposit; great gutters, which are sometimes seventy feet deep and two or three hundred yards across. These are the nullahs. Usually the smaller ones are dry, and the larger occupied only by streams; but in the season of the rains, abundant water pours down all, and in a few hours the brook has become an impassable torrent, and the river swelled into a rolling flood which caves the banks round which it swirls, and cuts the channel deeper year by year.

From the level plain of the valleys the hills rise abruptly. Their steep and rugged slopes are thickly strewn with great rocks, and covered with coarse, rank grass. Scattered pines grow on the higher ridges. In the water-courses the chenar, the beautiful eastern variety of the plane tree of the London squares and Paris boulevards, is occasionally found, and when found, is, for its pleasant shade, regarded with grateful respect. Reaching far up the sides of the hills are tiers of narrow terraces, chiefly the work of long-forgotten peoples, which catch the soil that the rain brings down, and support crops of barley and maize. The rice fields along both banks of the stream display a broad, winding strip of vivid green, which gives the eye its only relief from the sombre colours of the mountains.

In the spring, indeed, the valleys are brightened by many flowers—wild tulips, peonies, crocuses and several kinds of polyanthus; and among the fruits the water melon, some small grapes and mulberries are excellent, although in their production, nature is unaided by culture....