The Story of the Hymns and Tunes 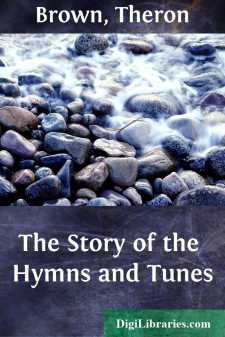 Augustine defines a hymn as “praise to God with song,” and another writer calls hymn-singing “a devotional approach to God in our emotions,”—which of course applies to both the words and the music. This religious emotion, reverently acknowledging the Divine Being in song, is a constant element, and wherever felt it makes the song a worship, irrespective of sect or creed. An eminent Episcopal divine, (says the Christian Register,) one Trinity Sunday, at the close of his sermon, read three hymns by Unitarian authors: one to God the Father, by Samuel Longfellow, one to Jesus, by Theodore Parker, and one to the Holy Spirit, by N.L. Frothingham. “There,” he said, “you have the Trinity—Father, Son, and Holy Ghost.”

It is natural to speak of hymns as “poems,” indiscriminately, for they have the same structure. But a hymn is not necessarily a poem, while a poem that can be sung as a hymn is something more than a poem. Imagination makes poems; devotion makes hymns. There can be poetry without emotion, but a hymn never. A poem may 12 / x argue; a hymn must not. In short to be a hymn, what is written must express spiritual feelings and desires. The music of faith, hope and charity will be somewhere in its strain.

Philosophy composes poems, but not hymns. “It is no love-symphony we hear when the lion thinkers roar,” some blunt writer has said. “The moles of Science have never found the heavenly dove's nest, and the Sea of Reason touches no shore where balm for sorrow grows.”

On the contrary there are thousands of true hymns that have no standing at the court of the muses. Even Cowper's Olney hymns, as Goldwin Smith has said, “have not any serious value as poetry. Hymns rarely have,” he continues. “There is nothing in them on which the creative imagination can be exercised. Hymns can be little more than the incense of a worshipping soul.”

A fellow-student of Phillips Brooks tells us that “most of his verse he wrote rapidly without revising, not putting much thought into it but using it as the vehicle and outlet of his feelings. It was the sign of responding love or gratitude and joy.”

To produce a hymn one needs something more exalting than poetic fancy; an influence

“—subtler than the sun-light in the leaf-bud That thrills thro' all the forest, making May.”

It is the Divine Spirit wakening the human heart to lyric language.

Religion sings; that is true, though all “religions” do not sing. There is no voice of sacred 13 / xi song in Islamism. The muezzin call from the minarets is not music. One listens in vain for melody among the worshippers of the “Light of Asia.” The hum of pagoda litanies, and the shouts and gongs of idol processions are not psalms. But many historic faiths have lost their melody, and we must go far back in the annals of ethnic life to find the songs they sung.

Worship appears to have been a primitive human instinct; and even when many gods took the place of One in the blinder faith of men it was nature worship making deities of the elements and addressing them with supplication and praise....