The Story of the Great War, Volume IV (of 8) Champagne, Artois, Grodno; Fall of Nish; Caucasus; Mesopotamia; Development of Air Strategy; United States and the War 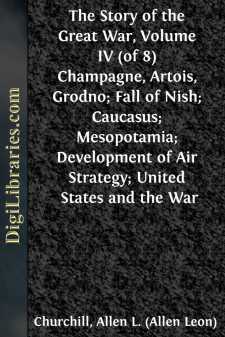 The leaders of the Turkish troops had been hard at work arousing the fanaticism of the Turkish soldiery against the British foe before the next day's battle began. It is due these noisy "Holy Warriors" that sentries of the Fifth Egyptian Field Battery were warned of the near presence of the enemy.

The Indian troops now took the offensive, supported by the warships and mountain and field artillery. The Serapeum garrison, consisting of Ninety-second Punjabis and Rajputs, now cleared its front of the enemy who had been stopped three-quarters of a mile away. A counterattack made by the Sixty-second Punjabis of the Tussum garrison drove the Turks back. Two battalions of the Turkish Twenty-eighth Regiment now joined the fight, but the British artillery threw them into disorder, and by 3 p. m. of February 3, 1915, the Moslems were in retreat, leaving behind them a rear guard of a few hundred men hidden in the gaps among the brush along the eastern bank.

The warships on Lake Timsah had been in action since morning, and the sand hills near Ismailia were at first crowded by civilians and soldiers eager to witness the fight, until the Turkish guns to the east and southeast of the Ferry post drove them in cover.

About 11 a. m. an old unprotected Indian Marine transport, H. M. S. Hardinge, was struck by two 6-inch shells. One carried away the funnel and the other burst inboard doing much damage. Two of the crew were killed and nine wounded. George Carew, the pilot, lost a leg, but continued on duty and helped to bring the injured vessel into Ismailia. The French coast guard battleship Requin came now under the Turkish fire, but her 10.8-inch guns soon silenced the enemy's batteries.

The morning of February 3, 1915, the Turks advanced on the Ismailia Ferry, then held by Sikhs, Punjabi Rifles, a battery of Indian mountain artillery and Australian engineers, digging shelter pits as they moved forward, covered by two field batteries. Their advance was stopped by the British guns when they had come within 1,000 yards of the outpost line. During the afternoon the Turks kept up some desultory firing that was ineffective; they also engaged in some reconnoitering of British positions during the dark night that followed, but when morning broke they had all disappeared.

Meanwhile, at El Kantara the struggle had reached much the same conclusion. The Indian troops had repelled an advance from the south, in which two Turkish regiments, the Eightieth and Eighty-first of the Twenty-seventh Division, were engaged. H.M.S. Swiftsure, which had taken the place of the disabled Hardinge, aided by Indian and Territorial artillery, did effective work in covering the British positions. The nature of the ground here was so marshy that in places the Turks sank to their waists in muddy ooze, and foredoomed their attack to failure. Again it was demonstrated that they are poor strategists and fail to make careful observations of the terrain before advancing to attack....