The Story of the First Trans-Continental Railroad Its Projectors, Construction and History 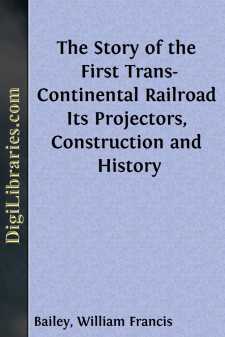 For some reason the people of today are not nearly as familiar with the achievements of the last fifty years as they are with those of earlier days.

The school boy can glibly recount the story of Columbus, William Penn, or Washington, but asked about the events leading up to the settlement of the West will know nothing of them and will probably reply "they don't teach us that in our school"—and it is true. Outside of the names of our presidents, the Rebellion, and the Spanish-American War, there is practically nothing of the events of the last fifty years in our school histories, and this is certainly wrong. "Peace hath her victories as well as War," and it is to the end that one of the great achievements of the last century may become better known that this account of the first great Pacific Railroad was written.

It was just as great an event for Lewis and Clark to cross the Rockies as it was for Columbus to cross the Atlantic. The Mormons not only made friends with the Indians as did Penn, but they also "made the desert to blossom as the rose," and Washington's battles at Princeton, White Plains, and Yorktown were but little more momentus in their results than Sandy Forsythe's on the Republican, Custer's on the Washita, or Crook's in the Sierra Madre.

The construction of the Union Pacific Railroad was of greater importance to the people of the United States than the inauguration of steamship service across the Atlantic or the laying of the Atlantic Telegraph. Yet the one has been heralded from time to time and the other allowed to sink into temporary obscurity.

To make good Americans of the coming generation all that is necessary is to make them proud of American achievements and the West was and is a field full of such.

The building of the Pacific Railroad was one of the great works of man. Its promoters were men of small means and little or no financial backing outside of the aid granted them by the Government. It took nerve and good Yankee grit to undertake and carry out the project. How it was done it is hoped the succeeding pages may show.

Poem read at the Celebration of the opening of the Pacific Railroad, Chicago, May 10th, 1869.

Through deserts vast and forests deepThrough mountains grand and hoaryA path is opened for all timeAnd we behold the glory.

We reach out towards the golden gateAnd eastward to the ocean.The tea will come at lightning rateAnd likewise Yankee notions.From spicy islands off the WestThe breezes now are blowing,And all creation does its bestTo set the greenbacks flowing.

The eastern tourist will turn outAnd visit all the stationsFor Pullman runs upon the routeWith most attractive rations.

The First Trans-continental Railroad. CHAPTER I. The Project and the Projectors.

It would appear that Thomas Jefferson is entitled to the credit of being the first to take action towards the opening of a road or route between the eastern states and the Pacific Coast. While he was in France in 1779 as American Envoy to the Court of Versailles he met one John Ledyard who had been with Captain Cook in his voyage around the world, in the course of which they had visited the coast of California. Out of the acquaintance grew an expedition under Ledyard that was to cross Russia and the Pacific Ocean to Alaska, thence take a Russian trading vessel from Sitka to the Spanish-Russian settlement on Nookta Sound (Coast of California) and from there proceed east overland until the settlements then confined to the Atlantic Seaboard were reached....