The Story of the Cambrian A Biography of a Railway 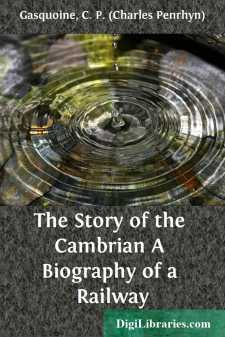 Credit for the inspiration of this book belongs to my friend, Mr. W. R. Hall, of Aberystwyth, who, in one of his interesting series of “Reminiscences” of half a century of Welsh journalism, contributed to the “Cambrian News,” recently expressed his surprise that no one had hitherto attempted to write the history of the Cambrian Railways.  With the termination of that Company’s separate existence, on its amalgamation with the Great Western Railway under the Government’s grouping scheme, “the hour” for such an effort seems to have struck; and Mr. Hall’s pointed indication of Oswestry as the most appropriate place where the work could be undertaken, not only by reason of its close connection with the official headquarters of the Cambrian, but because, in a certain newspaper office there lay the files containing so many old records of the railway’s birth and early struggles for existence, even the selection of “the man” appeared so severely circumscribed that to the present writer it virtually amounted to what, in certain ecclesiastical circles, is termed “a call.”

Responsibility for its acceptance, however, and for the execution of the task, with its manifold imperfections and shortcomings, rests entirely with the author, whose only qualification for assuming the rôle of biographer of the Cambrian is the deep interest he has always taken in a subject worthy of a far abler pen.  Not even the attempt would have been possible had it not been for the valuable assistance readily given by many kind friends directly or indirectly associated with the Cambrian Railways.

Special thanks are due, and hereby gratefully acknowledged, to Mr. Samuel Williamson General Manager, not for only much personal trouble taken in supplying information and looking through proof-sheets, but for placing no small portion of the time of some members of his clerical staff at the disposal of the author, who has troubled them on many occasions, but never without receiving prompt and patient response; to other officials and employees, past and present, of the Company for information regarding their several departments, and their personal recollections, including Mr. T. S. Goldsworthy, the senior officer and sole surviving member of the “old guard,” who played their part in the battles of the Parliamentary Committee-rooms of long ago, whose reminiscences of the days of old have proved particularly useful; to the Earl of Powis for permission to inspect the voluminous papers of the late Earl, whose name was so intimately associated with the early development of railway schemes in Montgomeryshire; to the family of the late Mr. David Howell for similar facilities in regard to his papers; and, for the loan of photographs or assistance of varied sort to Colonel Apperley, Mr. E. D. Nicholson, Park Issa, Oswestry, Mr. W. P. Rowlands and Mr. Edmund Gillart, Machynlleth, Mr. Robert Owen, Broad Street, Welshpool, Mr. J. Harold Thomas, Garth Derwen, Buttington, the Misses Ward, Whittington, Miss Mickleburgh, Oswestry, Mr. E. Shone, Oswestry, the Editor of the “Peterborough Advertiser,” the publishers of the “Great Western Magazine,” and others.

The indexing has been compiled by Mr. Kay, Public Librarian, Oswestry, to whom thanks are due for the efficient discharge of a rather irksome duty.

As to the arrangement of the book itself: in tracing the various stages of construction, often simultaneous or overlapping in point of time, of the several separate and formerly independent undertakings into which the Cambrian system was subsequently consolidated, and still further augmented by later local amalgamations, it has been found well-nigh impossible, chronologically, to maintain at once a clear and consecutive story.  Recourse has, therefore, been had to the method of dealing with each section of the line in separate chapters, and the same plan applies to some departments of development in later years.  But an endeavour has been made to follow, as comprehensively as such circumstances permit, the general course of the Railway’s growth; and it is in the hope that, however imperfectly, it may serve to recal seventy years of struggle, triumph and romance in Welsh railway annals that to Lt.-Col. David Davies, M.P., its last Chairman, and Mr. Samuel Williamson, its last General Manager, and his numerous other friends among the officers and staff of all ranks, the writer begs to dedicate this little story of the Cambrian, in memory of many happy days spent in travelling, as a privileged passenger, along its far-reaching lines....