The Story of Silk 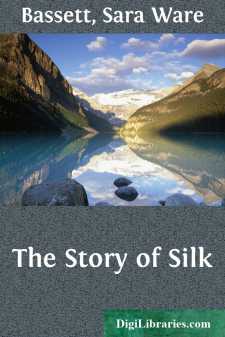 Madame Antoinette Bretton went for the third time to the door of her tiny cottage and, shading her eyes, looked anxiously up the side of the ice-capped mountain that flanked the garden. There was still no one in sight, and with a shake of her head she returned to the coarse grey socks she was knitting.

It was late afternoon, and through the stillness she could hear the roar of the river, the tinkle of herd-bells, and the faint sound of chimes from the far-away village chapel. How quiet the house seemed without Marie and Pierre! The boy and girl had climbed to the hillside pasture to drive the goats down for milking and Hector, the great St. Bernard dog that had been the children's companion ever since they were born, had gone with them, for Hector was an expert at rounding up a herd. Although he was not a young dog he had the zeal of a puppy; with this he combined the wisdom of a sage, and it was for the latter reason that Madame Bretton never worried about her children when Hector was with them. For to Madame Bretton the boy and the girl were still children. Neither Hector, Marie, nor Pierre had dreamed of being really grown up until the Great War had come and Monsieur Bretton, together with Uncle Jacques, had been called to the colors of France.

Throughout the valley were other boys and girls whose fathers, brothers, and uncles had left their homes behind—boys and girls who were not as old as Marie or Pierre, but who nevertheless were courageously trying to do the work of their elders. Marie was now nearly fifteen, and Pierre was sixteen; but when suddenly called upon to take their father's place, they felt much older. Yesterday they had been children with little to do but play; to-day work was ahead of them, much hard work, which seemed to have aged them in a single night and turned them from boy and girl into responsible grown up persons.

What a different village Bellerivre was with so many of its men away!

Yet how bravely its peasants had responded to the call, and how dauntlessly those left behind had risen to meet the new conditions of living!

"We who remain at home must keep things running in the customary grooves, so that our soldiers may find the town unchanged when they return," had been the cry.

And so these noble-hearted mothers and children had toiled uncomplainingly at garden, vineyard, and loom; had tended flocks of goats and cattle; and had harvested the hay and grain. For Bellerivre, walled in between the river Eisen and the snowy capped Pyrenees, was a fertile valley on which, in spite of the tragedy of national warfare, the sun seemed ever to shine. It was a mere dot of a place, with a vine-covered chapel, a low white convent tucked away among the hills, and a scattering of houses. In the centre of the town stood La Maison de Sainte Genevieve, the home of Monsieur le Curé, the much loved parish priest, who although bent and white-haired was the friend, counselor, and teacher of both young and old. The little schoolhouse where he had been accustomed to meet the children was, however, now closed; for in these troublous war days boys and girls had far more important duties to perform than to learn lessons. There were the great vineyards that striped the hills—these must not perish for want of care; then there were the gardens and hay-fields.

But none of these things, vital as they appeared, were of first importance in the community. It was from quite a different source that the peasants of Bellerivre derived their livelihood—a source peculiar if one was unfamiliar with it, but which had been the primary interest of the valley ever since its people could remember....