The Story of Rouen 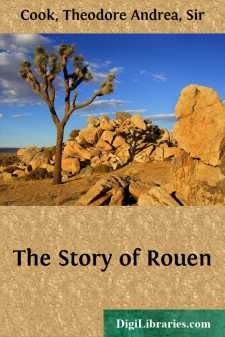 THE story of a town must differ from the history of a nation in that it is concerned not with large issues but with familiar and domestic details. A nation has no individuality. No single phrase can fairly sum up the characteristics of a people. But a town is like one face picked out of a crowd, a face that shows not merely the experience of our human span, but the traces of centuries that go backward into unrecorded time. In all this slow development a character that is individual and inseparable is gradually formed. That character never fades. It is to be found first in the geographical laws of permanent or slowly changed surroundings, and secondly in the outward aspect of the dwellings built by man, for his personal comfort or for the good of the material community, or for his spiritual needs.

To these three kinds of architecture I have attached this story of Rouen, because even in its remotest syllables there are some traces left that are still visible; and these traces increase as the story approaches modern times. While moats and ramparts still sever a city from its surrounding territory, the space within the walls preserves many of those sharply defined characteristics which grow fainter when town and country merge one into the other; the modern suburb gradually destroys the personality both of what it sprang from and of what it meets. Up to the beginning of the sixteenth century I have been more careful to explain the scattered relics of an earlier time than during the years when Rouen was filled with exquisite examples of the builder's art. After that century there is so little of distinction, and so much of average merit, that my story languishes beneath a load of bricks and mortar.

Each chapter in this book which describes an advance in time or a different phase of life and feeling will be found to be connected with the buildings that are either contemporaneous with that phase or most suggestive of it. I have thus been able to mention all the important architectural features of the town without disturbing a fairly even chronological development of the tale, in the hope that this method will appeal not only to the traveller who needs guidance and explanation in the place he visits, but also to the reader who prefers to hear my story by his own fireside. Working, then, with this double audience in my mind, I have used to a very large extent, in my description of the people's life, the documents they have left behind themselves, so that the best expression may be given of the vital fact that a town is built and fashioned and inspired not by a few great men, but by the many persistent citizens who dwell in it, working their will from age to age without shadow of changing.

One such manuscript, the work of many hands and many centuries, I must particularly mention. It is the record kept by the Cathedral Chapterhouse, from 1210 to 1790, of the prisoners pardoned by the Privilege of St. Romain's Shrine. Forbidden, for reasons of health, to investigate these ancient parchments for myself, I have been fortunate enough to find them all printed by the care of M....