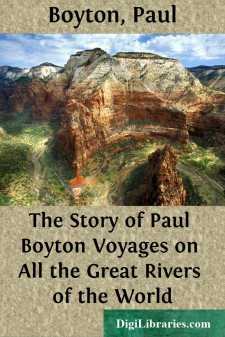 "Oh, Mrs. Boyton, do look at that child in the middle of the river paddling around on a board."

"Well," said the one addressed as Mrs. Boyton, "I'm glad it is none of mine. My son Paul, loves the water dearly, but I took the precaution to lock him up before I started for market."

After observing the child, who was evidently enjoying his aquatic sport, for some time, the two women proceeded on their way. On reaching home, Mrs. Boyton, with a feeling of remorse for keeping her young son so long in captivity, went up stairs to release him, and to her consternation found that he had escaped. Three minutes later an excited woman stood on bank of the Alleghany, vigorously waving her hand and hailing the youthful navigator. The forward end of the one by twelve inch board was reluctantly headed for shore, and slowly idled in. As the child reached land, he was grasped by the angry and anxious mother, who beat a merry tattoo on a tender portion his body with a shingle.

This was not the first time that the young hero had received punishment for loving the water. His home was within one block of the clear and swift flowing Alleghany; and whenever he could escape the vigilant eye of his mother, he was found either on the bank or in the water. One day, Mrs. Boyton, who had a continual dread of his being drowned, was going on a visit, and she determined to secure Paul against accident. She took him upstairs, undressed him and removed his clothes from the room. She locked the door and went away content.

The day was lovely; the water lay clear and blue in sight and Paul could hear the delighted cries of the boys as they plunged into its refreshing depths. The temperature was too strong. Paul searched the room carefully and to his joy, discovered a pair of his father's drawers. He got into them and tied the waist-string around his neck. Then forcing a window, he slid down the convenient lightning rod like a young monkey, and was found in his usual haunt by his astonished mother some hours later. From this time on, she gave him more liberty to follow his natural bent. From early May until late in October, when not at school, Paul spent most of his time in the water.

In those days, driftwood, consisting of slabs, logs and boards, were continually floating down the river from the headwaters, where the great forests were being cut down. When he saw a nice piece of wood, Paul would cut through the water like a young shark, and swim with it ahead of him to the shore, where his lumber pile was a goodly sized one. He kept his mother's cellar well supplied with firewood and sold the surplus to the neighbors; the proceeds of wich were devoted to gingerbread and even at that early age to the abominable roll of tobacco known as the "Pittsburgh Stogie."

Great rafts of lumber were coming down the river daily and a favorite amusement when he saw one, was to run up the river bank about a quarter of a mile, swim off and board it....