The Story of Paris 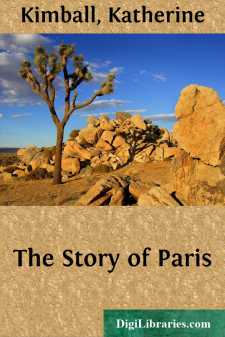 Add to My Favorites
Published: 9 years ago
Downloads: 295
Rating: (0 Votes)

In recasting Paris and its Story for issue in the "Mediæval Towns Series," opportunity has been taken of revising the whole and of adding a Second Part, wherein we have essayed the office of cicerone.

Obviously in so vast a range of study as that afforded by the city of Paris, compression and selection have been imperative: we have therefore limited our guidance to such routes and edifices as seemed to offer the more important objects of historic and artistic interest, excluding from our purview, with much regret, the works of contemporary artists. On the Louvre, as the richest Thesaurus of beautiful things in Europe, we have dwelt at some length and even so it has been possible only to deal broadly with its contents. A book has, however, this advantage over a corporeal guide; it can be curtly dismissed without fear of offence, when antipathy may impel the traveller to pass by, or sympathy invite him to linger over, the various objects indicated to his gaze. In a city where change is so constant and the housebreaker's pick so active, any work dealing with monuments of the past must needs soon become imperfect. Since the publication of Paris and its Story in the autumn of 1904, a picturesque group of old houses in the Rue de l'Arbre Sec, including the Hôtel des Mousquetaires, the traditional lodging of Dumas' d'Artagnan, has been swept away and a monstrous mass of engineering is now reared on its site: even as we write other demolitions of historic buildings are in progress. Care has, however, been taken to bring this little work up to date and our constant desire has been to render it useful to the inexperienced visitor to Paris. Success in so complicated and difficult a task can be but partial, and in this as in so many of life's aims "our wills," as good Sir Thomas Browne says, "must be our performances, and our intents make out our actions; otherwise our pious labours shall find anxiety in our graves and our best endeavours not hope, but fear, a resurrection."

It now remains to acknowledge our indebtedness to the following, among other authorities, which are here set down to obviate the necessity for repeated footnotes, and to indicate to readers who may desire to pursue the study of the history and art of Paris in more detail, some works among the enormous mass of literature on the subject that will repay perusal.

For the later Monarchy, the Revolutionary and Napoleonic periods, the Histories of Carlyle, Mignet, Michelet and Louis Blanc; the Origines de la France Contemporaine, by Taine; the Cambridge Modern History, Vol....