The Story of Norway 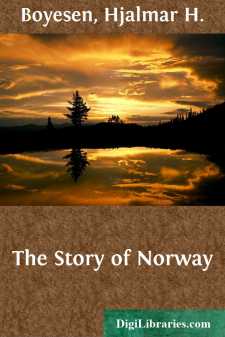 It has been my ambition for many years to write a history of Norway, chiefly because no such book, worthy of the name, exists in the English language. When the publishers of the present volume proposed to me to write the story of my native land, I therefore eagerly accepted their offer. The story, however, according to their plan, was to differ in some important respects from a regular history. It was to dwell particularly upon the dramatic phases of historical events, and concern itself but slightly with the growth of institutions and sociological phenomena. It therefore necessarily takes small account of proportion. In the present volume more space is given to the national hero, Olaf Tryggvesson, whose brief reign was crowded with dramatic events, than to kings who reigned ten times as long. For the same reason the four centuries of the Union with Denmark are treated with comparative brevity. Many things happened, no doubt, during those centuries, but "there were few deeds." Moreover, the separate history of Norway, in the time of her degradation, has never proved an attractive theme to Norse historians, for which reason the period has been generally neglected.

The principal sources of which I have availed myself in the preparation of the present volume, are Snorre Sturlasson: Norges Kongesagaer (Christiania, 1859, 2 vols.); P. A. Munch: Det Norske Folks Historie (Christiania, 1852, 6 vols.); R. Keyser: Efterladte Skrifter (Christiania, 1866, 2 vols.); Samlede Afhandlinger (1868); J. E. Sars: Udsigt over den Norske Historie (Christiania, 1877, 2 vols.); K. Maurer: Die Bekehrung des Norwegischen Stammes zum Christenthume (Munchen, 1856, 2 vols.), and Die Entstehung des Islandischen Staates (Munchen, 1852); G. Vigfusson: Sturlunga Saga (Oxford, 1878, 2 vols.); and Um timatal i Islendinga sogum i fornold (contained in Safn til sogu Islands, 1855); G. Storm: Snorre Sturlasson's Historieskrivning (Kjobenhavn, 1878); C. F. Allen: Haandbog i F?drelandets Historie (Kjobenhavn, 1863); besides a large number of scattered articles in German and Scandinavian historical magazines. A question which has presented many difficulties is the spelling of proper names. To adopt in every instance the ancient Icelandic form would scarcely be practicable, because the names in their modernized forms are usually familiar and easy to pronounce, while, in their Icelandic disguises, they are to English readers nearly unpronounceable, and present a needlessly forbidding appearance. Where a name has no well-recognized English equivalent, I have therefore adopted the modern Norwegian form, which usually differs from the ancient, in having dropped a final letter. Thus Sigurdr (which with an English genitive would be Sigurdr's) becomes in modern Norwegian Sigurd, Eirikr, Erik, etc. Those surnames, which are descriptive epithets, I have translated where they are easily translatable, thus writing Harold the Fairhaired, Haakon the Good, Olaf the Saint, etc. Absolute consistency would, however, give to some names a too cumbrous look, as, for instance, Einar the Twanger of Thamb (Thamb being the name of his bow), and I have in such instances kept the Norse name (Thambarskelver).

It is a pleasant duty to acknowledge my indebtedness for valuable criticism to my friends, E....