The Story of Newfoundland 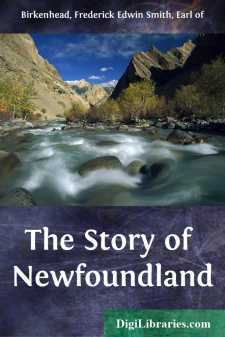 CHAPTER I THE LAND AND ITS PEOPLE

The island of Newfoundland, which is the tenth largest in the world, is about 1640 miles distant from Ireland, and of all the American coast is the nearest point to the Old World. Its relative position in the northern hemisphere may well be indicated by saying that the most northern point at Belle Isle Strait is in the same latitude as that of Edinburgh, whilst St. John's, near the southern extremity, lies in the same latitude as that of Paris. Strategically it forms the key to British North America. St. John's lies about half-way between Liverpool and New York, so that it offers a haven of refuge for needy craft plying between England and the American metropolis. The adjacent part of the coast is also the landing-place for most of the Transatlantic cables: it was at St. John's, too, that the first wireless ocean signals were received. From the sentimental point of view Newfoundland is the oldest of the English colonies, for our brave fishermen were familiar with its banks at a time when Virginia and New England were given over to solitude and the Redskin. Commercially it is the centre of the most bountiful fishing industry in the world, and the great potential wealth of its mines is now beyond question. On all these grounds the story of the colony is one with which every citizen of Greater Britain should be familiar. The historians of the island have been capable and in the main judicious, and to the works of Reeves, Bonnycastle, Pedley, Hatton, Harvey, and above all Chief Justice Prowse, and more recently to J.D. Rogers, every writer on Newfoundland must owe much. Of such elaborate work a writer in the present series may say with Virgil's shepherd, "Non invideo, miror magis"; for such a one is committed only to a sketch, made lighter by their labours, of the chief stages in the story of Newfoundland.

To understand that story a short account must be given at the outset of the situation and character of the island. But for the north-eastern side of the country, which is indented by deep and wide inlets, its shape might be roughly described as that of an equilateral triangle. Its area is nearly 43,000 square miles, so that it is larger than Scotland and considerably greater than Ireland, the area of which is 31,760 square miles. Compared to some of the smaller states of Europe, it is found to be twice as large as Denmark, and three times as large as Holland. There is only a mile difference between its greatest length, which from Cape Ray, the south-west point, to Cape Norman, the northern point, is 317 miles, and its greatest breadth, from west to east, 316 miles from Cape Spear to Cape Anguille. Its dependency, Labrador, an undefined strip of maritime territory, extends from Cape Chidley, where the Hudson's Straits begin in the north, to Blanc Sablon in the south, and includes the most easterly point of the mainland. The boundaries between Quebec and Labrador have been a matter of keen dispute. The inhabitants are for the most part Eskimos, engaged in fishing and hunting....