The Story of Manhattan 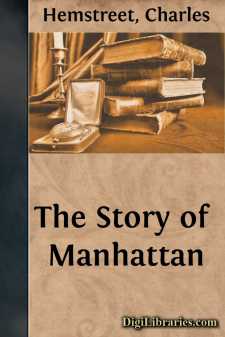 CHAPTER I. THE ADVENTURES of HENRY HUDSON

HE long and narrow Island of Manhattan was a wild and beautiful spot in the year 1609. In this year a little ship sailed up the bay below the island, took the river to the west, and went on. In these days there were no tall houses with white walls glistening in the sunlight, no church-spires, no noisy hum of running trains, no smoke to blot out the blue sky. None of these things. But in their place were beautiful trees with spreading branches, stretches of sand-hills, and green patches of grass. In the branches of the trees there were birds of varied colors, and wandering through the tangled undergrowth were many wild animals. The people of the island were men and women whose skins were quite red; strong and healthy people who clothed themselves in the furs of animals and made their houses of the trees and vines.

In this year of 1609, these people gathered on the shore of their island and looked with wonder at the boat, so different from any they had ever seen, as it was swept before the wind up the river.

The ship was called the Half Moon, and it had come all the way from Amsterdam, in the Dutch Netherlands. The Netherlands was quite a small country in the northern part of Europe, not nearly as large as the State of New York, and was usually called Holland, as Holland was the most important of its several states. But the Dutch owned other lands than these. They had islands in the Indian Ocean that were rich in spices of every sort, and the other European countries needed these spices. These islands, being quite close to India, were called the East Indies, and the company of Dutch merchants who did most of the business with them was called the East India Company. They had many ships, and the Half Moon was one of them.

It was a long way to the East India Islands from Holland, for in these days there was no Suez Canal to separate Asia and Africa, and the ships had to go around Africa by way of the Cape of Good Hope. Besides being a long distance, it was a dangerous passage; for although from its name one might take the Cape of Good Hope to be a very pleasant place, the winds blew there with great force, and the waves rolled so high that they often dashed the fragile ships to pieces.

So the merchants of Holland, and of other countries for that matter, were always thinking of a shorter course to the East Indies. They knew very little of North or South America, and believed that these countries were simply islands and that it was quite possible that a passage lay through them which would make a much nearer and a much safer way to the East Indies than around the dread Cape of Good Hope. So the East India Company built the ship Half Moon and got an Englishman named Henry Hudson to take charge of it, and started him off to find the short way. Hudson was chosen because he had already made two voyages for an English company, trying to find that same short passage, and was supposed to know ever so much more about it than anyone else....