The Story of Leather 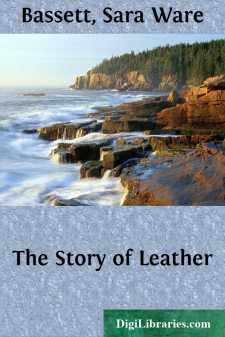 ETER CODDINGTON sat in the afternoon sunshine on the steps of his big colonial home looking absently out over the circular drive, and the quaint terraced garden, to the red-tiled roof of the garage beyond. But he was not thinking of the garage; he could not, in fact, even have told you the color of its vivid tiling. No! He had far more important things to think of than that—disquieting things which worried him and made him very unhappy. For about the twentieth time he took from his pocket his school report and ran his eye down the column of figures written upon the white card. He did not read because the reading gave him pleasure. Neither was the bit of pasteboard white any more. Instead it was thumbed and worn at the corners until it had gradually assumed a dismal grayish hue—a color quite in harmony with Peter’s own mood.

Peter really did not need to look at the report at all, for already he could close his eyes and see before him in glaring type:

What a horrible fascination there was in those marks! He found himself repeating them aloud to impress upon his mind the fact that they actually were true. But what was far more tragic than these testimonials of defeat was a foot-note written in red ink in the well-known hand of Mr. Christopher, the principal of the school. It read:

“In consequence of Peter Coddington’s poor scholarship and unsatisfactory deportment it is against the rules of the Milburn High School that he retain any position in school athletics until such time as both his studies and his conduct reach the standard required by the school authorities.”

It was that single sentence that made Peter’s face so grave. The marks alone were bad enough. He was heartily ashamed of them because he knew that if he had studied even a reasonable amount of time he could easily have passed in every subject. It was by no means difficult work for a boy of his ability. But to be put off the ball team! Why, it was on his pitching that the whole Milburn school was pinning its faith in the coming game against Leighton Academy. “Peter will save the day!” the fellows had declared. What would they say when they discovered that their hero was to be dropped from the team—that he had not passed one of the freshman examinations?

Half the pride and glory of the freshman class centered about Peter. Throughout the grammar school he had made a wonderful record in athletics; his unerring drop kick had won him fame at football long before he was out of the sixth grade, and he could pitch a ball with a speed and curve almost professional in its nicety. “Wait until Peter Coddington gets into the high school!” had been the cry. “Milburn can then wipe up the ground with every school within reach.” As Peter had never been much of a student the gate of this temple of learning had been difficult to reach; but at last the day came when he managed to squeak inside the coveted portals where all the honors promised him were at once laid at his feet....